Spring tends to bring about changes and nowhere is that more apparent than on the Strip as several shows and headliners change venues. Here’s a quick look at the shuffle:

The Sahara has signed comedian Roseanne Barr to an open-ended headlining slot at the hotel. She takes over the showroom recently vacated by magician-comedian Amazing Jonathan and will perform at 9:30pm five days a week, Saturdays through Tuesdays, with the show dark on Thursdays and Fridays. Tickets are $62 through $92 (VIP seating) and are available at the Sahara box office. Barr last appeared on the Strip in 2007 when she headlined a six-week run at New York-New York. 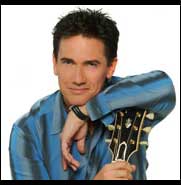 Impressionist and singer Gordie Brown recently closed out a long run at The Venetian showroom but now word comes he is resurfacing at the V Theater at the Miracle Mile Shops starting on March 31st. Brown will perform at 10pm nightly except Sundays, when the show is dark.

Tickets will be $64.90 for general admission, $75.90 for VIP seating, $84.90 for general admission with dinner and $95.90 for VIP seating with dinner. Dinner packages include a voucher for dinner at Lombardi’s, La Salsa Cantina, Blondies, Pampas Brazilian Grille or the Hawaiian Tropic Zone, all located at the Miracle Mile Shops at Planet Hollywood. Vouchers must be used on the day of the ticketed performance.

Meanwhile, Nathan Burton, who recently departed the V Theater, starts his new run at the Flamingo’s main showroom starting on April 21st. He will perform at 4pm Fridays through Wednesdays, with the show dark on Thursdays. Tickets will range from $34 to $44 and are on sale now at the Flamingo box office and by phone at 702.733.3333 or 800.221.7299.

Ronn Lucas and his troupe of puppets will be moving one resort over as they go from the Luxor to the Excalibur. Lucas will perform his afternoon shows inside the Thunder from Down Under showroom at 1pm, Tuesdays through Sundays, starting April 1st.

American Storm, the male revue made popular by the VH-1 reality show “Stripsearch,” during which the members were chosen, has moved from the Riviera to Polly Esther’s nightclub at the Stratosphere. They perform nightly at 8:30pm (except on Sundays and Tuesdays) and admission is $49.95 (plus fees and taxes). Tickets may be purchased by calling 1.800.99.TOWER or in person at the Stratosphere Ticket Center, and there is free admission to Polly Esther’s after the show with the purchase of a ticket. All ticket holders must be 21 to attend since the show is inside a nightclub.

Just a reminder that the popular Rat Pack tribute show that was formerly at the Greek Isles hotel has found a new home at the Plaza hotel downtown. They now play Monday through Saturday at the hotel’s new Copa Room. Tickets are $49.99 plus tax and can be purchased at the hotel box office or by phone at 702.737.5540.