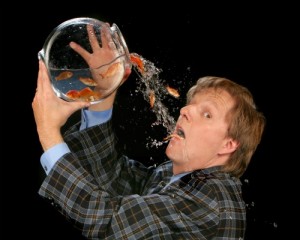 Any Las Vegas entertainer who invites audience members to participate in a show takes a huge leap of faith. The best performers in Las Vegas not only take the chance by inviting this interaction but thrive when it doesn’t always work out as planned. Such is the case with The Mac King Comedy Magic Show where Mac, a magician and comedian (!), not only engages the audience but does an excellent job at playing off any snafus that arise during his routine.

Mac King is no stranger to the Las Vegas scene. For more than 12 years he has entertained more than a million people—28,600 of whom have appeared as audience volunteers in a classic lounge showroom—at Harrah’s Las Vegas, and he doesn’t show any signs of slowing down anytime soon.

It’s no surprise that Mac is a magician and such a good one at that. He grew up around magicians and has been an entertainer all his life in live performances and on television shows. In his Las Vegas show, Mac strings along a series of simple but puzzling tricks while keeping the audience laughing. His first trick is a rope trick, and right away he dives into the audience to find someone willing to assist on stage. From there, he moves into card tricks, simple illusions and a dollar decoy. Audience members seem to be particularly impressed with his ability to catch a goldfish from out of thin air, and his use of a “magic cloak” (i.e. rain poncho) is brilliant (made even more so by the fact that the audience members chosen for this trick during the show I saw didn’t even speak English).

Parents should note that this show is completely clean and fun for children as well as adults, and Mac’s single trick that requires a child is one of the best in the show. In fact, whereas many magicians thrive on potentially dangerous or nail biting thrills to keep people interested, Mac keeps it simple, clean and fun, which just goes to show that, while the magic is entertaining, it’s the performer who really does make the show.

From the first moment he steps on stage until his final bow, Mac keeps this 75-minute, family-friendly show interesting and entertaining. As long as Las Vegas is around, there will be shows that continue to pop up all over the Strip. Many will come and go in just a few short years, but those with staying power, like The Mac King Comedy Magic Show, are still among the very best choices for entertainment in Las Vegas.

The Mac King Comedy Magic Show is at Harrah’s Las Vegas Tuesday through Saturday at 1:00 p.m. and 3:00 p.m. It is dark on Sunday and Monday.

My ticket for The Mac King Comedy Magic Show was comped but all opinions are my own.