Penn Jillette Tapped For Dancing With the Stars

As one half of the popular comedic illusionist act Penn & Teller, Penn Jillette entertains Vegas visitors and locals alike with sleight of hand and other tricks at the duo’s headlining show at the Rio. Last night it was announced that Jillette will now get to test whether his feet have the same magic as his hands when he was announced as one of the celebrity competitors on the upcoming sixth season of the popular ABC reality TV series, “Dancing With the Stars.” 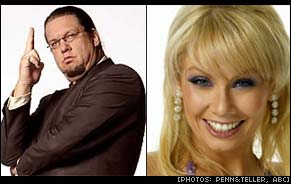 One has to wonder when Jillette will find the time to actually appear, much less practice the weekly dance moves. In addition to the almost nightly show at the Rio, he and Teller host the popular Showtime show “Bullsh*t!“, which sets out to debunk and expose the myths and frauds behind some of todays most talked about topics. To date the show has received eleven Emmy nominations. Jillette also hosts an online video show called “Penn Rants” for the new Sony/Crackle website and writes for a variety of print and online outlets.

It does appear that the Rio is already accommodating Jillette, though, with a temporary change of schedule. From March 10-May 23, 2008, there will be no performances on Mondays and Tuesdays. However, additional shows will be added on Fridays at 9:00pm. The hotel is also offering a 25% discount for Total Rewards members who print out the online coupon (look for the link on the right column of the page) for shows through March 31st.

Given that list, Jillette does appear on the surface to be one of the dark horses of the competition, but if he can pull a rabbit out of a hat, who knows what tricks he can unleash on the dance floor. I guess we’ll see once the competition gets underway on March 17th at 8pm on ABC.

So what do you think? Does Penn Jillette have what it takes to be king of this season’s dance?