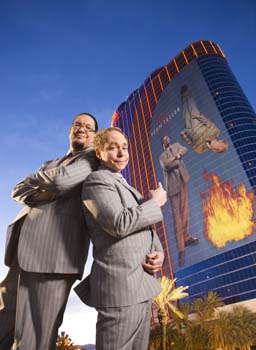 They’re quirky and clever, and chances are they’ll get you so wrapped up in their performance, you won’t even know you’ve been tricked.

That’s Penn and Teller for you. The duo has been together since 1975, when they begin combining Penn’s clown college education and overwhelming stage personality with Teller’s silent and sneaky magic tricks. 2010 marks their five-year anniversary in the theater at Rio Las Vegas.

It’s no wonder that Penn & Teller have stood the test of time. Their show at Rio is not simply a magic show, but rather an edgy comedic conversation punctuated by innovative illusions. Before the show begins, every member of the audience is encouraged to examine an empty box on the stage, and once the curtain rises, Teller appears from that supposed empty box. Throughout the show, these seemingly inconceivable but simple things just happen.

As the audience sits wondering how people appear from nowhere and bullets are caught in midair, the show bounces from one act to the next with minimal time to digest how exactly these two are creating illusions despite telling the audience that they really want to let them in on industry secrets. In fact, you will learn how the balls-under-the-cups trick happens … but don’t be deceived. The trick is actually on you.

Penn and Teller make a good pair onstage. Because he’s the only one who talks during the act, Penn is, in many ways, the center of attention on stage. But Teller is just as important in each and every act, and it’s his silent, often diminutive presence that defines the key points of a successful trick. Keep your eye on this guy. The two work together to distract and deceive the audience for nearly two hours, and when the lights finally come up in the theater, chances are you’ll leave uttering the words “how” and “did you see …”

Arrive early to the show to be entertained by pianist Mike Jones and his shadowy counterpart on bass (look closely … you might recognize who it is).

This is not a typical run-of-the-mill magic show, so while kids over the age of five are welcome to attend the performance, don’t expect to see any rabbits pulled out of hats. Older children and adults will appreciate the sophistication, humor and social commentary that laces this eccentric show.

Penn & Teller shows nightly at 9:00 p.m. with The Mike Jones Duo pre-show beginning at 8:00 p.m. It is dark every Thursday and Friday night. Seating throughout the theater is good, but sitting closer to the stage gives you the opportunity to keep your eyes on the details.