Phantom – The Las Vegas Spectacular at The Venetian 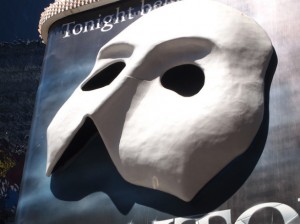 Considered one of the most memorable, impressive and romantic shows in Las Vegas, Phantom – The Las Vegas Spectacular (“Phantom” in this review) not only lives up to its hype, it far exceeds it. There are a lot of shows (Las Vegas-based, Broadway and traveling) that people enjoy, but once they’ve seen it, they move on to something new. Phantom of the Opera and its condensed Las Vegas version are two shows that people revisit over and over again. In fact, Phantom has several “super fans” (a name given by the cast members), who have seen the show dozens of times.

So, what’s all the excitement about?

Let’s start with the theater itself. Unlike the traveling version, Phantom has the distinct advantage of having a home at The Venetian. The show is set almost entirely in the Paris Opera House, so the set for the show includes opera boxes along both sides of the audience, which are “occupied” by show goers in their Sunday best. Elaborate ornamentation adorns the sides and tops of the stage. Above the audience hang pieces of a giant chandelier, which are pieced together early in the show and play a significant part in a later scene.

As Phantom progress, audience members are treated to a menagerie of ornate sets, which include grand staircases, underworld canals and detailed theater backdrops. Characters are outfitted in period clothing, and the masquerade sequence includes dozens of colorful, over-the-top costumes and masks.

The music for Phantom was written by Andrew Lloyd Webber and is, in a way, a rock opera. As a musical, the story is very much told through the music, which is a good mix of slow, operatic songs, humorous theater tunes and heavier, louder selections. If you haven’t seen the show before, chances are you’ll be impressed by how much can be done with just a few basic musical cues.

And then, of course, there’s the story, which revolves around a young opera singer named Christine and the Phantom of the Opera. The disfigured Phantom tutors and falls in love with Christine, who mistakenly thinks he is an “angel of music” sent from heaven by her father. Raoul, a childhood friend of Christine’s, courts the girl and enrages the Phantom, who wants Christine for himself. The two men fight against each other for Christine; Raoul uses love and affection while the Phantom uses power and fear, unleashing a series of horrible events that shake the theater. In the end, Christine must choose Raoul or the Phantom.

It’s a classic story of good versus evil, and while audiences are generally rooting for Raoul because the Phantom is actually quite cruel, you can’t help but feel some sympathy for the main character. It’s easy to get wrapped up in the story, and more than a few people were drying their eyes as the final curtain fell.

If you’ve seen the Phantom of the Opera before, you might be wondering what makes this show different and worth seeing. Lines were cut from the original show, extra verses in some of the songs were trimmed and, of course, the theater is entirely different. There is no intermission, and the entire show runs about 95 minutes. The changes to the show make it leaner but nothing of vital importance has been cut, so nothing is really lost in this version. Many people who have seen both actually prefer the Las Vegas version.

This is a great show for a date night or romantic outing. It is also ideal for the romantic at heart, a girl’s weekend in Las Vegas or even a cultural family outing for children over the age of 10.

Phantom – The Las Vegas Spectacular runs Monday through Saturday and is dark on Sunday. Shows are at 7:00 p.m. every night with 9:30 p.m. performances added on Monday and Saturday.