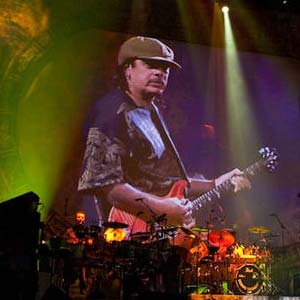 When it was announced that legendary guitarist Carlos Santana had signed a contract to be a artist-in-residence at the newly renovated Joint concert venue at the Hard Rock Hotel, people were surprised.

After all, not only is he an artist capable of selling out arenas, but people were wondering how a straight-up concert residency would compare to the full-blown theatrical shows of musicians in residence up and down the Strip, like Bette Midler and her predecessor Celine Dion.

With the first week’s shows under his belt at the Joint, it appears that Santana seems to be settling in nicely to his new semi-home.

Serving up over 40 years of hits, Santana played to a packed house of fans eager to see the iconic musician. This isn’t some highly choreographed stage production, though. It’s a full concert filled with great music and lengthy improv jam sessions.

But as noted in the LA Times review of the show, even though Santana’s music encouraged people to dance, roaming ushers and security definitely didn’t let concert goers stray from their seats – folded chairs, nonetheless.

Of course, the venue has been renovated to be a more versatile venue for not only concerts, but sporting events, but it might be worth the investment to bring in more comfortable seats if they wish fans of Santana to stay in them.

Under his residency, Santana will play approximately 30-40 shows a year at the Joint, which is said to be the only place to catch the artist play in North America in 2009. It is also rumored he may be joined from time to time by some of his musical friends, so it is unlikely any one show will be like another.

If you’ve seen any of Santana’s shows at the Joint, feel free to leave your thoughts in our comments, or drop us a link to your blog review.