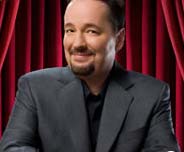 Ever since winning the 2007 season of NBC’s hit reality show “America’s Got Talent,” ventriloquist Terry Fator has been wowing crowds in Las Vegas. Last year, The Mirage signed Fator to a multi-million dollar contract, and tickets have now gone on sale for the first of his 2009 dates at the resort.

Preview performances for his new show run February 14-March 13, 2009, with regular performances scheduled to start March 17, 2009.  Fator will perform Tuesday through Saturday at 7:30pm, with the show dark on Sundays and Mondays.

For those not familiar with him, Fator combines the art of ventriloquism with singing celebrity impersonations. He uses his cast of puppet characters, including Winston the Turtle, Walter T. Airdale and Emma Taylor, to perform in the singing styles of artists as diverse at Tony Bennett, Elvis, Justin Timberlake, Etta James and Garth Brooks. His show is family friendly, though children under 5 are not allowed to attend.

At The Mirage, Fator will perform in a specially designed theater named after him and there will also be a companion retail store, also bearing his name. In addition to selling Fator memorabilia, the store will soon be stocking his first book, “Who’s the Dummy Now?”, which chronicles his rise to fame.

Tickets for the regular performances will be priced at $59, $79, $99 and $129, excluding tax and service fees. The $129 tickets include VIP seating, a photo souvenir and front line access to a meet & greet event after the show. All preview performances will be discounted 25 percent.