In the last two posts, I showed you some great new stills from the upcoming show Believe, which will be opening soon at the Luxor.

One last set of new images from the upcoming Criss Angel and Cirque du Soleil production is a pair of photos showcasing the dancers. 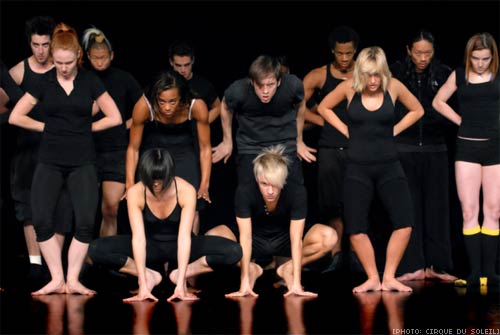 Now, when paired with the costuming, the same positioning and expressions add to the menacing atmosphere of the fantasy nightmare world of the show’s storyline, even though most of the dancers have their faces hidden by masks and makeup.

Choreography for the show comes courtesy of Australian dancer Wade Robson, who made a name for himself at a young age by choreographing award-winning videos for pop artists like N’Sync and Britney Spears. But even though he’s also choreographed world tours for the likes of Usher and Pink, Believe has certainly got to be one of the most ambitious projects he’s ever done.

I’m actually really interested in seeing how combination of Angel’s illusions will mesh with the Cirque’s legendary surreal stage shows. I’m told when the theater was redesigned, the seats were all realigned so that nobody will be sitting more than 110 feet from the stage. Angel really wants people to be completely immersed in the show but still walk away wondering how he did the illusions.

What do you think of the costumes? Do they entice you to want to see Believe?