Flamingo headliner Toni Braxton has decided to cancel all remaining dates of her show, which was scheduled to run through mid-August 2008. 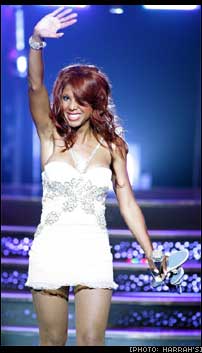 About three months ago, she was hospitalized with heart problems resulting from the birth of her second child and we’ve chronicled her possible eventual return. But it seems that the chanteuse has decided to not return at all, based on advice from her doctors.

In a statement released by the Flamingo, Don Marrandino, the resort’s president, said,”“We have truly enjoyed having her as our resident headliner and continue to wish her a full and quick recovery so that she may resume doing what she loves best, entertaining audiences.”

Anyone currently holding tickets for any canceled Braxton shows can obtain a full refund at the Flamingo box office.

The legendary Donny and Marie Osmond had already been scheduled to take over the theater which had housed the “Toni Braxton – Revealed” show since August 2006. And judging from the fact that they just went through a blitz of auditions for backing dancers, the show looks well on its way to keeping the September 9, 2008 start date.

But what about the busy summer months? Well, the Flamingo says they are bringing in the classic 80s funk group, The Time, to fill in most of the dates.

Morris Day and his original band mates, drummer Jellybean Johnson, bass player Terry Lewis, valet Jerome Benton, guitarist Jesse Johnson and keyboard duo Jimmy Jam and Monte Moir will all perform their classics such as “Jungle Love” and “The Bird” starting June 24 through 28. They’ll return for another round of dates July 1 through 5 and again from July 29 through Aug. 2. Tickets for their 7:30pm shows will run from $65 to $150 and are available at the Flamingo box office.

At that time, I’m guessing the theater will start its conversion over to the Donny and Marie setup. Tickets for their Tuesday through Saturday 7:30pm shows will run $85 through $115, with a special VIP package that includes an after-show photo with the duo going for $250 per person. Those tickets are also available at the Flamingo box office.

All other summer dates will feature magician Nathan Burton and comedian George Wallace continuing to share the showroom at 4pm and 10pm respectively. Tickets to Burton are $34 and $44, while Wallace’s show will set you back $75 a seat.