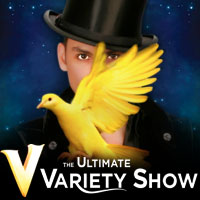 Though the shows in Las Vegas can’t please everyone, part of the purpose behind V – The Ultimate Variety Show is to serve up a variety of acts to entertain a variety of people.

The show opens with Wally Eastwood, a world-renowned juggler and emcee for the duration of the show, who revisits the stage frequently between acts. He easily juggles a handful of pins, flips hats on his head while juggling them and integrates bouncing ping-pong balls into his juggling act. His most impressive routine involves bouncing balls off of a giant keyboard to play classic orchestral tunes and rock hits. Wally is also a natural comedian, throwing tongue-in-cheek jokes out to the audience and receiving roars of laughter in return. He is comfortable on stage and an excellent choice for entertainment between acts.

V – The Ultimate Variety Show is ultimately about the other acts, though, which, according to the introductory film clip at the beginning of the show, are the best of the best in the city. They include the classic strong men, aerial acrobats who perform tricks suspended above the audience, tap dancers and Joe Trammel, a comedian who bounces between dozens of characters in just a few minutes time. Another comedian, Russ Merlin, pulls four audience members for an act involving ridiculous masks and a balloon blowing contest.

Due to the nature of V – The Ultimate Variety Show, acts can come and go at any time, and I was surprised by the fact that the show I watched had no women in it. Let’s just say that seemed to lack a bit of variety. But Wally is a sure bet, and he alone carries this show. Though some of the other acts are entertaining, none of them are particularly spectacular, and similar acts can be found elsewhere in Las Vegas.

There’s a lot going on at the V Theater, and with the several shows going on at a time, it can feel a bit overwhelming as people are shuffled into a theater and then herded back out to make room for another show. Perhaps it’s due to this herd in/move out type of strategy that I found the theater for V – The Ultimate Variety Show to be a bit lacking. Most of the theater is general seating, which means you can sit anywhere you choose, but in front of the front rows are several rows of chairs, as if they’d oversold the theater and just needed to squeeze a few more people in. That said, due to this constant hustle of moving people in and out, there’s little lag time and the show starts promptly.

My tickets for V – The Ultimate Variety Show were comped, but the opinions in this review are my own.