Two shows are slated to end their runs at the Las Vegas Hilton this spring. 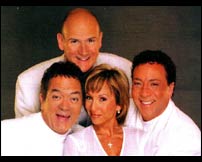 The comedy-musical show “Laugh Out Loud With The Scintas” will have its final performance on March 14, 2008.

The Scintas quartet, comprised of siblings Frankie, Joey and Chrissi Scintas, along with Pete O’Donnell, brought their show to the Las Vegas Hilton in 2007, after long-running stints at the Sahara and Rio. A spokesperson for the group says they have plans to work on a syndicated television show and still will be performing limited dates around the country.

Also taking its final bow at the hotel’s Shimmer Cabaret is “Menopause the Musical,” an ode to women who are on the brink of, in the middle of, or have survived menopause.

Its final show will be April 5, 2008, after a three-year run in Vegas. Tickets for the remaining shows are $49.50, with performances Monday, Tuesday, Thursday and Friday at 7pm, Saturday at 4pm, and Sunday at 6pm.

The hotel hasn’t announced future plans for the soon to be empty theater, but musical legend Barry Manilow will continue to be a headliner in his own theater on property.

Bobby Slayton, the self-professed “Pitbull of Comedy” loses his kennel when he plays his last show at Hooters Casino on March 8, 2009. The show will be his 500th at the hotel’s Night Owl Showroom, where he’s been the headliner since it opened in the spring of 2007.

Slayton says he is shooting a TV pilot and has plans to release a DVD of his stand-up. He also has plans to play the Montreal Comedy Festival this year. He’s not sure if he’ll return to Vegas again in a residency or just to play a few weeks at a time but he says, “When all that is done, I’m looking at a number of possibilities to return to Vegas. I’m sure by then my wife and daughter will have had enough of me! I love Las Vegas and can’t imagine not coming back here!!!”

Lucky Cheng’s, the drag queen dinner show at Krave Nightclub has closed after three years on the Strip. No word if it will resurface elsewhere.

But fear not, word is the show will be replaced with a new show featuring a magician-comedian who performs in drag. More information on that as I get it.