Next to gambling, taking in a show is a great way to enjoy Vegas. Here’s the latest news on all of the productions Sin City has to offer:

Donny and Marie Osmond to Possibly Headline the Strip 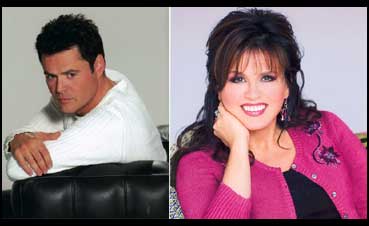 The lure of having their fans travel to see them rather than the other way around has claimed yet another set of pop culture icons. Siblings Donny and Marie Osmond are reportedly in final negotiations to headline their own show at the Flamingo.

Their show would start in September of this year, and allow them at least twenty weeks of shows a year on a rotating basis with current Flamingo Showroom headliners Toni Braxton and comedian George Wallace. Nathan Burton will continue to use the stage for his early shows.

This is a real coup for the Flamingo, if the deal is signed. Donny and Marie recently sold out a week of shows this summer at the MGM Grand almost as fast as tickets went on sale.

The duo will next be in Las Vegas hosting the upcoming live telecast of the Miss USA 2008 on April 11th at the Planet Hollywood resort-casino. They are also in the midst of celebrating their family’s 50th year in show business.

Popular Strip comedian/magician Mac King is taking his daytime show on the road from Harrah’s to Barnes & Noble on March 30th. King will host a book signing for his newest tome, “Mac King’s Magic in a Minute Great Big Ol’ Book-O-Magic,” as well as performing tricks from the book, from 1pm until 3pm. The event takes place at the store’s location at 8915 West Charleston Blvd in Summerlin. For more information, call 702.242.1987.

Ventriloquist Terry Fator, who rose to fame when he won the last season of the hit NBC show “America’s Got Talent,” has proven so popular that his contract has been extended through the end of 2008. Fator and his family friendly puppet troupe will continue to rotate as a weekend headliner at the Las Vegas Hilton.