Divas Las Vegas, the new show starring Vegas legend Frank Marino has been picked up by the Imperial Palace. 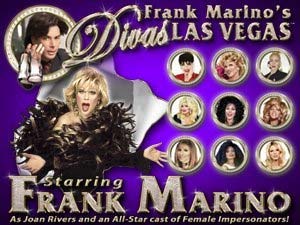 After a trial run, the IP has decided to give Marino a one-year contract. The show features 16 female-impersonators performing as such stars as Beyonce, Britney Spears, Lady Gaga, Celine Dion, Tina Turner and Cher.

Marino formerly headlined the La Cage drag show at the Riviera for twenty-three years before it closed earlier this year in February. Joining Marino onstage for the new show are several of his cast members from the La Cage days, so the new show may seem slightly familiar to long-time fans.

According to an interview with RJ columnist Mike Weatherford, Marino and producer Adam Steck consider the new show to still be in the preview stages and are still tweaking the show. They plan to hold the grand opening festivities sometime in February.

Divas Las Vegas runs Saturdays through Thursdays (dark on Fridays) at 10pm and ticket prices start at $69. It replaces the former headlining show, Legends in Concert, which now plays at Harrah’s next door.

Charo, who has been on hiatus from her show at the Riviera since September, has closed her show at least until the end of the year.

She injured herself performing at the Jerry Lewis Telethon over Labor Day weekend, but was supposed to resume her show next month. No word if the talented flamenco guitarist will return at all in 2010.

Those holding tickets to any of the canceled shows should seek a refund at the point of purchase.

The entertainer has been the headliner at The Venetian with his Making %@it Up show. However, last month, he took time off to film “Let’s Make a Deal,” an update of the popular game TV game show, at the Tropicana.

Now, reportedly under advice of physicians, Brady has canceled all shows at The Venetian for the remainder of 2009 due to strained vocal chords.

According to the resort, these shows will be rescheduled for 2010, but no dates are being given at this time. Please contact The Venetian box office or the place of purchase for further information.