Three show closings to report on: 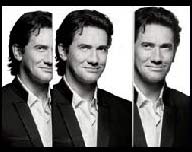 Longtime Strip showman Gordie Brown has announced he will be ending his run at The Venetian as of February 13th. The impressionist first began performing in The Venetian Showroom in October 2006. No reason has been given for the abrupt departure.

Several sources say the Venetian has offered him his own specially built theater at the resort, which would take up to nine months to build. He reportedly is seriously considering the offer. In the meantime, Brown says he will be turning his attention to other projects, including recording and a possible national tour.

Entertainer Wayne Brady, who has been performing on a limited-engagement contract with the resort, is said to be moving into The Venetian Showroom full-time once Brown leaves. This new contract will reportedly give Brady five shows a week through the end of May 2009.

If you’d like to see any of Brown’s remaining shows at The Venetian, he performs nightly at 7pm, except for Thursdays. Tickets are $74, and are available at the Venetian box office.

Amazing Jonathan Closes His Show at the Sahara

In an interesting turn of events, comedic magician Amazing Jonathan has suddenly closed his show at the Sahara, as of January 26th.

Ongoing legal battles with management there are to blame, including charges by AJ that resort management not only installed secret cameras to spy on the women in his act, but that the Sahara were also caught taking tickets from the box office to resell for their own profit without AJ seeing a penny.

Or as he puts it, “…after deciding these were not the kind of people you want to be working for, I quit and I’m taking the show somewhere more condusive to reality.”

Can’t say I blame him. Nobody likes to get shafted by those they work for.

According to the hard-working entertainer, he won’t be down for long, though, as his show will resume in an even bigger-and-better capacity when it takes up residence elsewhere on the Strip later this spring. Most likely he’ll slide in over at the Harmon Theater at Planet Hollywood, where one of the major shows is about to end.

I wish him all the best in this new endeavor, as he puts on one of the best shows I’ve seen in Vegas.

The Producers Final Show Looming Near

As reported last November, The Producers is ending its run on the Strip as of February 9th. This makes the show run just slightly over one year at the Paris Las Vegas. Star Tony Danza is staying with the musical until the final curtain call, but there isn’t much time left if you want to see the show.

Tickets to the remaining nights of The Producers are priced from $69 to $143.50 including taxes and fees. Performances are Mondays through Saturdays at 8pm, with the show dark on Sundays. To purchase tickets visit the Paris Las Vegas box office or call 702.946.4567.

There still has been no word on what will replace The Producers at the resort, but as soon as I find out, I’ll let you know.