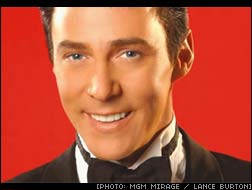 Last Friday’s fire at the Monte Carlo resort has impacted more than just guests staying at the resort.

Due to the fact that the hotel is still completely closed for business, magician Lance Burton has been forced to cancel all shows until at least Wednesday, January 30th. This date may be extended, pending the resort obtaining the necessary clearances to reopen.

If you are holding tickets for any canceled shows, you can obtain a refund or request an exchange for a different date at the place you purchased the tickets or at the MGM Grand box office (since the Monte Carlo box office is unavailable). For questions about upcoming show dates, call the Monte Carlo hotline direct at 702.730.7160.

Not interested in watching the Superbowl this weekend? Then you might want to take advantage of a special Super “Men in Tights” Sunday package running for the hit show Spamalot at the Wynn Las Vegas.

The $69 package includes one ticket to the 8pm show, as well as admission to a special cocktail reception immediately following where you can “meet and mingle” with show lead John O’Hurley, who has returned to reprise his role of King Arthur, as well as the rest of the men of Spamalot.

If you’d prefer to see the resort’s other hit show, Le Reve, there is another promotion currently running for all Friday nights in February.

Simply purchase a regularly priced Premium seat for $119 at the Wynn box office or via the phone number above, and you’ll also get a complimentary “Tango” cocktail from Level Vodka and gourmet chocolates by renowned chef Frederic Robert to enjoy during the show.

The Soprano’s Last Supper Moves To Yet Another Venue

It may be the last supper, but it sure knows how to get around. The Soprano’s Last Supper, a comedy show based on the mob life and the popular HBO series, is moving to its third venue when it takes up residence at the Riviera Comedy Club starting January 31st.

The interactive show will run at 6pm, prior to the club’s usual stand-up comedy acts, with tickets running $65 and $95 (plus taxes). An add-on dinner package will also be available.

The show originated at Krave nightclub in May 2006, and then migrated to the Empire Ballroom, where it ended its run last week on January 22. Producers of the show say Sopranos actor Steve Schirripa will be one of many who will attend the official grand opening of the show in its new venue on February 12.

The music of the Tempations may be timeless, but the oldies music revue starring singers from the group has been forced to close at the Sahara.

A legal injunction filed by original member Otis Williams alleges the name of the show, “Legendary Lead Singers of the Temptations,” infringes upon a trademark held by him to the band’s name.

Until the legalities are worked out, the Sahara has closed the show, which also starred the Planters and Cornell Gunter’s Coasters, until further notice. If you are holding tickets to shows that have been canceled, you may obtain a refund from the box office. Call 702.737.2515 for more information.