2008 was a year that had a lot of fluctuations in Vegas show offerings. So many shows saw their final curtain call, while even more opened with the promise of longevity, only to close within months.

Here’s a look at the shows that come and gone over the past year:

Outspoken comedian Rosanne Barr opened a show at The Sahara, claiming the resort was a perfect fit for her, but left quietly only a short time later.

R&B vocalist Toni Braxton started canceling shows early in the year at the Flamingo due to health concerns, eventually ending the show in April. She was well enough, however, to compete in “Dancing with the Stars” mere months later,

Impressionist/singer Gordie Brown closed his popular show at The Venetian, in hopes of opening again at the sister Palazzo resort. When that didn’t happen, he performed at the V Theater at Planet Hollywood’s Miracle Mile, then left Vegas for several months to tour with fellow Vegas headliner Celine Dion. Fans need not worry, though. Brown will return in 2009 to a new theater at the Golden Nugget downtown – the same place where he first played in Vegas before moving to the Strip.

Danny Gans closed his popular and long-running show in 2008 at the Mirage, but will return in a specially built theater at the new Encore hotel.

“Hats! The Musical” opened to a chorus line of ladies from the Red Hat Society at Harrah’s, but closed only three months later.

Larry G. Jones and his repertoire of impressions took a final bow at Fitzgeralds downtown.

Ronn Lucas moved his family-friendly show from the Luxor to the Excalibur, and then moved on to nowhere in Vegas when the show closed.

Not even topless women could stop “Ooh La La” from getting axed at Paris Las Vegas.

Also at Paris Las Vegas, Broadway hit musical, “The Producers,” closed in February, exactly one year after its much feted opening, and several cast changes.

“The Real Deal” opened and closed so fast the cards barely hit the table at The Venetian.

The Second City comedy troupe revamped their show and then closed it a few weeks later at the Flamingo.

John O’Hurley and the talented cast of “Spamalot” took their final bow at the Wynn.

“Star Trek: The Experience,” may have not have been an actual show, but many people trekked to the Las Vegas Hilton to see it. Unfortunately, the Klingons, Ferengi and the Borg are now searching for new worlds to conquer…or at least a new venue to host the attraction.

The Steve Wyrick Theatre at the Miracle Mile Shops had a ton of shows come and go before people even realized they were there like “The Gazillion Bubble Show,” Tom Dane and Wes Winters. Who? Exactly what most people seeing shows said. The only production still there is the Steve Wyrick magic show.

“America’s Got Talent” finalists The Three Redneck Tenors also enjoyed a limited run at the Luxor, but couldn’t seem to find an audience.

“The World’s Greatest Magic Show” wasn’t so great at The Greek Isles hotel, where it closed earlier this year.

In addition to all of the closings, several acts and shows jumped around to new venues over the past year, and even more open and thrived.

The Amazing Johnathan left the Sahara, under much controversy, to reopen at the Harmon Theater, next to Planet Hollywood.

Nathan Burton moved his show to a bigger venue at the Flamingo, where he is still performing.

“America’s Got Talent” season two winner Terry Fator went from performing in a rotating slot at the Las Vegas Hilton to getting his own theater at The Mirage, where he opens in February.

Broadway hit “The Jersey Boys,” based on the life of Frankie Valli, opened at the Palazzo and continues to do well. 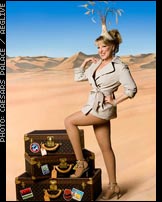 Only a sassy broad (and I mean that with much love and respect) like Bette Midler could replace the long-running and newly departed Celine Dion. Her show is doing very well and has been extended well into 2009 at Caesars Palace.

Donny and Marie Osmond found a new home in Vegas at The Flamingo and proved such popular headliners that a six-week gig has now turned into a two year contract.

“The Rat Pack” moved downtown to the Plaza.

“Scarlett: Princess of Magic” opened in August and is still doing well at the V Theater.

“The Soprano’s Last Supper” dinner show moved from The Strip to the Greek Isles Hotel.

The new year will bring several show changes early, too.

“Mamma Mia” will close its long run at Mandalay Bay on January 4, to be replaced in Spring 2009 by “The Lion King,” Disney’s hit Broadway musical. Yes, that’s right…Disney will now have a presence in Vegas.

“Stomp” will close in early January at Planet Hollywood and will reopen at The Riviera later in the Spring. It will be replaced by a new musical called “Peepshow,” starring former “Dancing with the Stars” contestants Mel B and Kelly Monaco.

And the much hyped and even more maligned Criss Angel-Cirque du Soleil production “Believe” will probably close for a few months while they attempt to revamp the show. Over the past year, the show kept running into problems preventing it from opening, but once it finally did, at Halloween, it has been widely panned by both reviewers and general attendees alike. Even our readers chimed in with extremely negative comments. If the show can’t be fixed to a level that both Cirque and Angel can agree upon, it’s likely the show will be canceled and in that event, Cirque may just use the theater to host its currently traveling productions in a revolving line-up.

With the tight economy affecting tourism in Las Vegas, it will be interesting to see what happens to shows currently running in 2009. Visitors and locals alike will be watching their dollars and that may be trouble for a lot of the productions going on around town, especially with some of the smaller and/or off-Strip venues.

What shows will you place your bets on for surviving or folding in 2009?