In this week’s round-up of Vegas show news, it’s all about the burlesque… 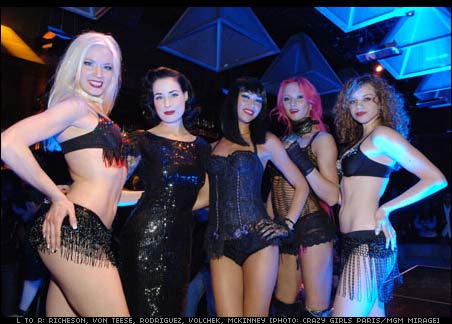 Last week, MGM Grand’s Crazy Horse Paris hosted auditions to add three new dancers to its roster of beauties. Guest judge Dita Von Teese, managing director Andree Deissenberg, international choreographer Molly Molloy and show manager Volga Mostouskaya had such a hard time choosing that they eventually made the decision to think outside the box and pick four instead of three. And after ten hours of auditions, the finalists were announced at Tabú Ultra Lounge in a special party hosted by Von Teese.

Among the quartet are two Las Vegas dancers. Russian-born Polina Volchek was a dancer with The Fashionistas until it recently closed its run, and Krystle Richeson, a Virginia girl who moved here after touring with the Radio City Rockettes. The other two winners were Korean-born Elena Lee Rodriguez and another Virginian, Kara McKinney.

The four dancers will now head to France to undergo two months of rehearsals, costume fittings and styling. When they are done, they will then enter the dancer rotations between the three Crazy Horse Paris troupes in Paris, Spain and Las Vegas for a two-year contract. 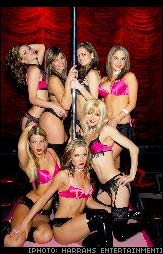 It seems the formula is working as the show celebrates its first anniversary and show no signs of slowing down. Congratulations to show producers Angela and Matt Stabile, as well as their six dancers, for a show that’s highly rated among those who see it.

Tucked away in a corner of Mandalay Bay, behind the escalator leading to the Mandalay Place shops, Ivan Kane’s Forty Deuce has entertained thousands of guests with its hot female burlesque dancers. Now the club aims to redefine itself by offering a new special theme night called Stormy Mondays.

What’s so different about this weekly event is that the dancers are men. Yup, as of last week (March 3), Forty Deuce’s stage now features male burlesque starting at 10pm every Monday, with go-go boys, duets and larger scale production numbers entertaining those in attendance throughout the night.

The dancers were all hand-selected by club owner Ivan Kane and his choreographer Tovaris Wilson, and Kane says he hopes the male dancers will attract a new audience for the club.

“I’m always looking to push the envelope and reinvent burlesque again,” explains Kane. “Forty Deuce will always be known for the ‘classic’ burlesque show that started six years ago in Hollywood and began the burlesque craze, but with the incredible success of the rock n’ roll-themed Royal Jelly, I was looking to do something new… and there’s nothing newer than male burlesque. The show is ridiculously hot!”

Stormy Mondays looks to be yet one more reason to visit Ivan Kane’s Forty Deuce at Mandalay Bay. But they might want to reinforce the stage poles to hold all that beefcake.

Forty Deuce is open every night except Tuesday, with special theme nights of Royal Jelly Thursdays (featuring Rock’n’Roll burlesque) and Silicone Sundays (an exotic dancer industry night). Admission to the club is $20 on Mondays and Wednesdays, $25 Thursdays and Sundays and $40 on Fridays and Saturdays. For more information, you can call the club at 702.632.9442.