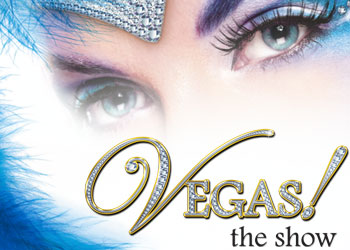 Many Las Vegas shows have a shtick: They’re magic shows or boast an array of contortionists and acrobats. Or perhaps they feature a specific stand-up comedian or are specifically designed as large-scale production shows with plots and characters.

The beauty of Vegas! The Show is that it’s a little bit of everything. It’s a touch of magic, a bit of puppetry, a little tap dancing, lots of singing and a good, all-around display of Las Vegas entertainment. What is perhaps most appealing about Vegas! The Show, however, is that it is a walk down memory lane. It begins with a scene at the Neon Boneyard, narrated by a custodian who talks briefly (but humorously) about Sin City’s history and the people who gave the city a name. The scene is a fitting one, given that the Neon Boneyard really is a place where old neon signs go to die … but the stories behind these signs lives on.

From there, the show takes off in a whirlwind of acts featuring a large cast of approximately 40 singers and dancers as well as a full-fledged band that plays on-stage to accompany the entertainers. It really is a road trip through the years, beginning with a scene in which Louis Prima and Keely Smith entertain in a showroom long before their Rat Pack years.

Moving through the decades, the audience is treated to classic Las Vegas showgirls, a can-can room and stealthy 70s performers clad in go-go boots. All of the performers zip through an impressive number costumes as they move from one act to the other, capturing Las Vegas through the years. This isn’t a tribute show, and the performers aren’t trying to emulate anyone that made a name for himself in Las Vegas, but they do perform songs by Sammy Davis, Jr., Tina Turner, Elvis, Sonny and Cher and other notable entertainers. Don’t go to this show looking for a look-a-like Britney Spears. This isn’t about imitating anyone; it’s about paying tribute and respect to past Las Vegas icons.

Between the show’s main acts are filler scenes, which are as entertaining as the full-cast, showy pieces. It’s during these interludes that guests are treated to a talented tap dancing duo, a puppeteer who puts on a Liberace show and a handful of singers who put on solo performances.

The show concludes with a tribute to Elton John. As the performer—clad in a white suit and oversized glasses—sings “Rocket Man,” scenes of Las Vegas in years gone by are displayed for the audience. Clips of the actual iconic Las Vegas performers are merged with images of Sin City buildings that have been imploded over the years. This is followed by a few parting words from the custodian back in the Neon Boneyward. It’s a bittersweet reminder that, while some of Las Vegas’ highlights are in the past, the city maintains an allure that is far from lost.

Vegas! The Show is a feel good, fun show in which audience members are invited to sing and clap along to songs of yesteryear. It runs approximately 90 minutes but never lags, leaving guests feeling energized when the curtain falls. Though there are no age restrictions for the show, some of the costumes are a bit risqué, so parents may want to reconsider taking children who have not reached a level of maturity appropriate for this type of environment.

Located in the Saxe Theater in the Miracle Mile of Planet Hollywood, Vegas! The Show plays at 7:00 p.m. and 9:00 p.m. nightly except for Sundays.

>>Buy tickets for Vegas! The Show.

My ticket for Vegas! The Show was compensated by Saxe Theater, but all opinions in this review are my own.