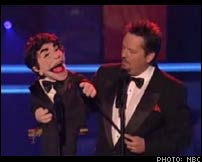 Over the years, The Mirage has been home to some of the best entertainment in Vegas. From Siegfried & Roy to Danny Gans to LOVE by Cirque du Soleil, the headlining shows offered by the resort have been a big hit with visitors and locals alike.

The Mirage has announced they have signed “America’s Got Talent” winner Terry Fator to a five-year deal, with an option for an additional five years.

Scott Sibella, president and COO of The Mirage, said of the signing, “Terry is an extraordinary talent and won the hearts of millions of Americans when he competed in the TV show. We are thrilled that he will perform at The Mirage where millions more will be able to enjoy him.”

The comic impersonator/ventriloquist wowed the nation with his talent last year, winning the TV show’s second season. He has since performed on a revolving basis at the Las Vegas Hilton to sold out crowds.

Starting in February 2009, Fator will become the newest headliner at the Mirage, helming the 1,265-seat Terry Fator Theatre for five shows a week.

At the announcement, Fator said, “This is an unbelievable dream come true and I am looking forward to becoming a member of The Mirage family.”