Word has leaked out that Mr. Las Vegas himself, Wayne Newton, has had to cancel his annual six-week Holiday show at Harrah’s at the last minute, due to health concerns. 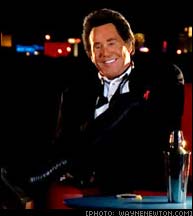 Newton reportedly suffers from a pre-existing pulimanary condition that was aggravated by his recent stint on the TV show “Dancing With the Stars”. The grueling weekly training is said to have taken its toll on the entertainer, and after he and dance partner Cheryl Burke were elimated, he went in for a series of tests.

Concern about his health was again raised when Newton missed the funeral for his good friend Robert Goulet last week. The two were close and Newton had been the best man at Goulet’s wedding to Vera Novak.

Then on Wednesday (Nov. 14), Newton’s representatives informed Harrah’s that he couldn’t perform his scheduled shows due to his ailing health.

The shows were to start last night (Nov. 15), and Harrah’s says anyone holding tickets can return them for a full refund.

Sin City during the Holidays just won’t be the same without Mr. Vegas. We wish him all the best in his recovery.