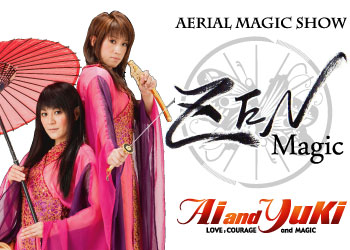 Noted in marketing materials as Japan’s “first ladies of illusion,” Ai and Yuki are the women behind Zen Magic, a Las Vegas matinee that combines magic and illusion with aerial acrobatics.

Zen Magic has a loose plot line whereby Ai and Yuki have to flex their magical muscle (along with the help of bell-ringing audience members) to thwart the evil Tengu and his gang of evil sidekicks, but you don’t have to follow the story to enjoy the show.

Ai and Yuki perform a variety of classic magic and illusion tricks with ease and speed throughout Zen Magic. They make water appear in empty jugs, escape from locked handcuffs, walk through mirrors and somehow manage to disappear into thin air. The acts are fairly standard stage tricks, but the women of Zen Magic do them seamlessly.

The cast for Zen Magic is small, and, in addition to Ai, Yuki, Tengu and the couple other bad guys, there are a handful of male dancers, gymnasts and aerialists as well as one very talented acrobat. This woman, dressed as a colorful bird, almost steals the show with an act that requires her to flip fluidly through the air and land on a thin beam held by two men. During this part of the show, everyone in the audience audibly holds their breath in anticipation.

Zen Magic moves quickly from scene to scene, tying together illusion acts with acrobatics, drumming, acrobatic ballet, dancing and gymnastics. This pace, combined with it’s running time of approximately 70 minutes and the 4:00 showtime, is one of the main reasons why families might be interested attending. During the show, a young child is invited onto the stage to take part in the act, and, despite the “bad guy” in the show, it is not dark, scary or inappropriate for kids. Before the show, audience members have the opportunity to buy souvenir bells, which they can ring during the show to help defeat Tengu; this interaction also helps hold younger audience members’ attention.

Admittedly, there are a lot of illusionist and magic shows on the Las Vegas Strip. Zen Magic is probably not the most polished act you’ll find on the Strip, and it doesn’t have the high-end theatrics of Cirque du Soleil, but it’s definitely worth giving this show a second look before passing it by for something with a bigger name. In fact, this is one of the few shows in Las Vegas that is affordable, appropriate and fun for the entire family. The theatre is small and intimate, and kids under 10 get in free with a paid adult.

Shows are Saturday through Thursday at 4:00 in the Saxe Theater, which is located in the Miracle Mile at Planet Hollywood.

My ticket for Zen Magic was compensated by Saxe Theater, but all opinions in this review are my own.