NASCAR Gets Set To Roll Into Vegas

Hear that rumble of engines? It’s only going to get louder this weekend when NASCAR comes to town for its annual event at the Las Vegas Motor Speedway (LVMS).

Vegas’ own Robin Leach is scheduled to emcee the big event, with the National Anthem to be sung by country singer Josh Gracin on Saturday and Mamma Mia! cast member Carol Linnea Johnson on Sunday. 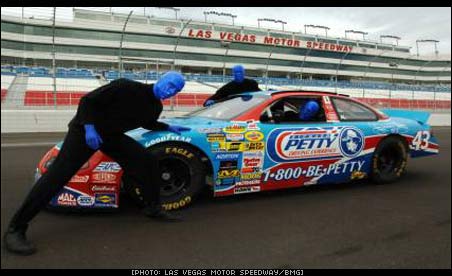 All weekend long, visitors to the track can take a break from the racing to stop by and catch country music impersonators play at the Neon Garage. The notable exception to this is the Blue Man Group will make an appearance on both Saturday and Sunday at 11am to perform for the crowds.

Jason Michael Carroll, Billboard Magazine’s top new country artist of 2007, will perform on a stage behind the grandstand Sunday morning (time to still be determined), and the cast from Stomp Out Loud is also scheduled for a short performance at 11;45am on Sunday. Finally, for those really feeling the need for speed, the U.S. Air Force Thunderbirds will perform a flyover before Sunday’s race. A full entertainment calendar can be found at the LVMS website.

Single day tickets are still available, starting at $25 for Friday, $37 for the Sam’s Town 300 and $80 for the UAW-Dodge 400 main event. Weekend packages start at $117 with special event passes, such at pit access, also available. All tickets and passes can be purchased at the Las Vegas Motor Speedway box office or online at LVMS.com.

There is also a special promotion going on at South Point through the end of the month for NASCAR fans. If you are a member of their player’s club, you can visit The Club counter at the hotel through February 29 to pick up two free tickets to qualifying day on Friday at the racetrack.

Now with thousands of fans expected to be visiting the Las Vegas Motor Speedway all weekend, it’s important to note there will be special traffic procedures in effect. The LVMS has a printable .pdf map on their website of inbound and outbound traffic patterns that will be in place. You can also find Flash map versions of these at the Review-Journal website.

Those not wanting to drive to the track can take advantage of a special RTC Race Transit service that will be in effect all weekend. A one day pass will cost $30 for unlimited rides, with a full 3-day race transit pass costing $60 and a one-way cash fare for the route costing $20.

As for the rest of you that will be traveling in and around Vegas this coming weekend, Metro Police say that if your route doesn’t have to take you near the LVMS, they advise that you go nowhere near it to save yourself the headache of dealing with the congestion expected near the speedway.

Have you attended a NASCAR event at the LVMS in the past? Tell us about it in comments.