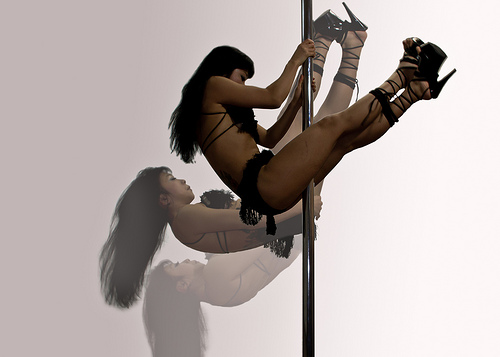 Las Vegas has, without a doubt, one of the largest collections of strip clubs in the United States, and, depending on your personal preferences, possibly the best selection in the world as well. The movement toward “gentlemen’s clubs” has swept up most of the larger establishments in the city, but there are still a number of old-fashioned places where the girls have just as many tattoos as the bikers passing them a dollar for each song.

Most of the strip clubs in Las Vegas feature topless entertainment only, and they can and do serve buckets of alcohol, usually at rather high prices. Several of the older strip clubs have all-nude entertainment, and these places are forbidden from serving alcohol but that doesn’t stop them from requiring a drink minimum, which are outrageously priced.

The only exception to this rule is the Palomino Club near downtown Las Vegas, which is an all-nude club that also serves alcohol.

In general, the more attractive dancers tend to work at the topless joints that serve alcohol. These also tend to be the classiest strip clubs in town, and the dancers at these clubs often make the most money without having to fully reveal themselves.

This was one of the clubs by which standards at all of the classy gentleman’s clubs was set, and not much has changed since it’s debut more than a decade ago. Open 24 hours a day, the Olympic Garden Cabaret allows patrons to get in for free before 6:00 p.m. The club is located near Stratosphere between the Strip and downtown Las Vegas.

Located across the street from Hard Rock Hotel, Club Paradise somehow manages to be a strip club with nightclub appeal. The girls wear sexy gowns instead of just bikinis so this place tends to feel classier than most. With monthly themed and open bar events, Club Paradise keeps patrons guessing.

Considered one of the nicest and classiest clubs in Las Vegas, Treasures has been touted as the world’s most expensive strip club. One reason is the extensive listing of club packages that patrons can choose from, including open bar, drink, dinner and VIP bottle packages. Expect to pay more if you arrive by taxi or limo.

Sapphire Las Vegas is open 24 hours a day and doesn’t charge a cover fee for those who arrive with their own transportation between 6:00 a.m. and 6:00 p.m. Though Las Vegas strip clubs are open to everyone, Sapphire Las Vegas is perhaps the most popular club for women to patronize (though men still far outnumber the ladies).

With 25,000 square feet of space, Rick’s Las Vegas is not only one of the city’s busiest strip clubs but also one of the largest in the world. More than 300 dancers entertain crowds here, and most patrons feel like they’re free to relax and enjoy the atmosphere without having to tip every girl in the club.

This smaller downtown club was renovated in recent years, and, for the most part, reviews have been positive. This is the only strip club right in the middle of the Fremont Street area, and, because of its accessibility, many couples wander in so there are more women patrons here than at some other clubs in Las Vegas.

Definitely one of the old school strip clubs of Las Vegas, the Palomino Club still feels like it’s stuck in a bygone era, but that’s not a bad thing. The girls aren’t pushy, and a free shuttle allows patrons to save on cab fare on alcoholic beverages instead.

This nude and alcohol-free club has a cover charge of $25.00, but that includes unlimited drinks. There are several themed nights throughout the week including 2-for-1 dance specials and jello wrestling.

Open 24 hours a day, Sheri’s Cabaret isn’t considered the classiest of joints in Las Vegas, but the entertainers are fun. Though this is an alcohol-free club, its sister club, Seamless, is topless only and alcohol is served. A free shuttle runs between the two, which makes it easy to double the fun.

Getting to Las Vegas Strip Clubs

With only a couple of exceptions, most of the Las Vegas strip clubs are in obscure parts of town and not conveniently close to the hotels. People most commonly reach the clubs via taxi or limo, which are the best options, especially if you plan on drinking. If you have a designated driver with your group, having a rental car can be a great way to hop from club to club. This allows you leave at your leisure if you don’t like what you find inside.

Alcohol tends to be expensive inside these clubs, especially the nicer ones. Expect to pay $7.00 for a beer, closer to $10.00 for anything else and even more at some clubs. Lap dances or table dances are around $20.00 at nearly all of the strip clubs in Las Vegas, but if you go into the exclusive VIP room (the name varies from club to club), you’ll pay much more. Whether the service in that slightly-more-private room is worth the extra money is for you to decide.

Many of the nicer strip clubs have a dress code. Shirts with collars and no shorts is generally the safest bet, but the best thing to do is dress with common sense. You’re going out to a club; make an effort to look like you want to be there. Once you get there, keep in mind that the dancers have a job to do, and that is to entertain the patrons. No touching is allowed, so keep your hands off and just enjoy the experience. And remember that prostitution is illegal in Las Vegas. Don’t try to solicit sex from the girls in the clubs.

Don’t arrive at the club empty handed. You will be expected to buy drinks and potentially pay a cover fee. Beyond that, the dancers work for tips, so keep a fistful of bills handy in order to tip those who have spent the night entertaining you.