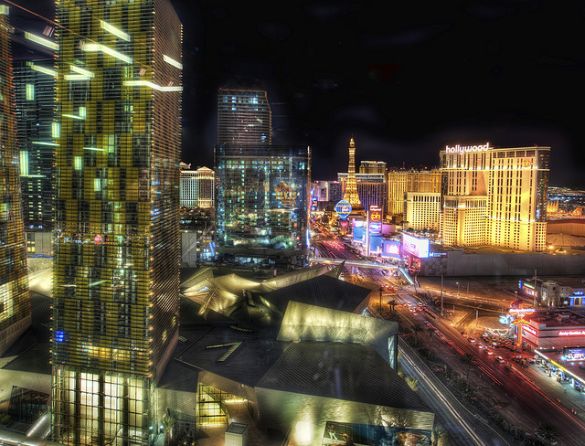 In one sense, Las Vegas doesn’t have an abundance of “attractions” like other cities do with museums, theme parks or historic buildings, but in another sense the entire city is one attraction after another. Of course the famous Las Vegas Strip is the center of the show. Featuring many of the world’s largest hotels, the Strip is both a collection of attractions and an attraction in and of itself.

There are many hotels on the Las Vegas Strip, though they wouldn’t all be considered attractions. Highlights include:

A lot of people travel to Las Vegas for the casinos and for good reason: There are tens of thousands of slot machines, countless gaming tables and incredibly high tech sports bars throughout the city. If there’s a game you’d like to play, chances are you can find it in Las Vegas. Even if you aren’t a gambler, many of the casinos are spectacular just to look at and walk through anyway.

The diversity of shows in Las Vegas means that there really is something for everyone. Cirque du Soleil has a dominant presence in the city, but there are also magicians, comedians, adult revues, variety shows, dinner shows and concerts. Just about every hotel on the Strip has a permanent show, though some, such as The Cosmopolitan, draw in crowds with ever-revolving, small venue, big name performers.

Many hotels on Las Vegas Boulevard draw in crowds with at least one nightclub, if not two or three. These clubs range from small boutique nighttime hot spots to large venues with massive dance floors. Nearly all offer bottle service and VIP treatment for the right price. The nightclubs open late in Las Vegas and leave their doors open until the wee hours of the morning. During holidays and special events, you’ll want to make sure you arrive early enough to avoid being shut out.

Celebrity chefs and award-winning restaurants are the norm in Las Vegas. Casual American dining, sushi, steakhouses, tapas, lavish buffets, extravagant desserts, alcoholic beverages of every kind, and cuisine from every corner of the Earth can be found on the Las Vegas Strip.

There are a few places to get your shop on along the Strip, including the Fashion Show Mall, Miracle Mile at Planet Hollywood, Grand Canal Shoppes at the Venetian and Forum Shops at Caesars Palace. In addition, several of the hotels have a few small specialty stores.

Getting Around the Strip

Though the Strip can look deceivingly short, don’t be fooled by the four miles it takes to get from Mandalay Bay to the Stratosphere. You’ll be able to walk short chunks of the Strip, but if you plan on walking the whole thing, wear comfortable shoes and take lots of water with you. Most people like to take a taxi to get where they need to go, but a cheaper option is riding the bus. The Las Vegas monorail runs along part of the Strip, but there are also free trams that run from Mandalay Bay to Excalibur, Bellagio to Monte Carlo and Treasure Island to Mirage.