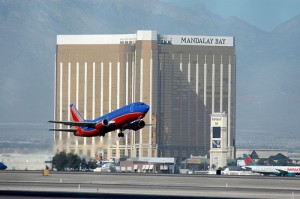 Of course, there are several other airports throughout the state of New York where travelers can catch flights to Las Vegas.

The average plane ticket from New York to Las Vegas costs around $350.00 round trip, however there are occasional deals that allow visitors to find cheap flights to Las Vegas. Air Tran often has the least expensive ticket prices, and Frontier also offers relatively inexpensive flights, but JetBlue, which offers the most non-stop flights between the two destinations, usually has low prices as well.

There really isn’t a “low” season in Las Vegas but rather slower times of the year. Some people believe that the weather in the summer turns people off, but this is one of the busiest times of the year in Las Vegas. Others think that the ideal weather in the winter encourages visitors but this is when some of the shows and attractions close for maintenance. There is an increase of visitors during holidays and conventions, and gamblers flock to the city during heavy betting events such as the Kentucky Derby, the Superbowl and March Madness. The least expensive flights are usually the red-eye flights and those that go between the two cities in the middle of the week. If you want to visit Las Vegas during one of the busier periods of time, purchase a ticket far in advance as seats do fill up on flights.

With 321 flights between the two cities weekly, you’ll always find a flight that goes from point A to point B. United Airlines offers the shortest flight at 2,236 miles. Most flights will have at least one stop, however, and Los Angeles is one of the more popular places for a layover on this route.