Getting from Los Angeles to Las Vegas 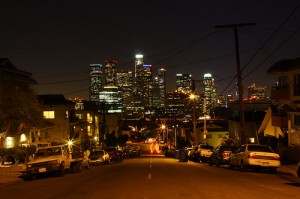 Many people choose to make the journey from Los Angeles to Las Vegas by car, but you can also get between the two cities by air and bus.

Driving distance between the two cities is 270 miles / 435 kilometers.

Air
There are several flights between Los Angeles and Las Vegas every day. American Airlines, Delta, US Airways, United and Continental all offer nonstop service between the two cities. Ticket prices are generally between $100.00 and $200.00 per person round trip, but there are frequently cheap flights to Las Vegas from Los Angeles. Flight time is approximately one hour and ten minutes. Total travel time is about three hours.

There are a variety of buses that run between Los Angeles and Las Vegas a number of times each day. Ticket prices generally range from $35.00 to $80.00 depending on which company you choose and the time of year you travel. Some of the less expensive options, such as Tours4Fun, actually run the trip as a tour, which includes a stop for lunch and shopping. Other shuttle bus services, such as Greyhound, simply run to and from bus stations (and in Los Angeles, the train station) in both cities, with occasional stops along the way to pick up other passengers. Total travel time by bus is usually five to seven hours, depending on traffic and scheduled stops.

Los Angeles and Las Vegas are approximately four hours away from each other by car, depending on what day of the week and time of day you drive. The two cities are connected by I-15, which, at one point, drops down to two lanes plus one truck lane in both directions, so traffic can back up easily. On Friday afternoons, expect heavy traffic eastbound into Las Vegas, and on Sundays, you will encounter more traffic heading westbound to Los Angeles.