Getting from Reno to Las Vegas 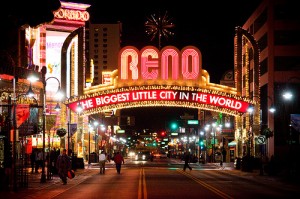 Don’t be fooled by the fact that Reno and Las Vegas are both in Nevada. The two cities are hundreds of miles apart and getting from one to the other by car can take nearly all day. In addition to driving, visitors hoping to travel from Reno to Las Vegas also have the opportunity to go by air and bus.

Driving distance between the two cities is 452 miles / 727 kilometers.

Southwest Airlines offers several nonstop flights between Reno and Las Vegas daily. If you prefer to fly nonstop, you will pay a bit more than if you opt for a connecting flight, but total flight time between the two cities is only slightly more than an hour. Total travel time is about three hours.

Several other airlines offer connecting service between Reno and Las Vegas including American Airlines, Delta, US Airways, Continental, Alaska Airlines and United. Most layovers are in Los Angeles, Salt Lake City or San Francisco and are just a couple of hours long. With a layover, flight time is approximately four or five hours. Expect total travel time to take about six hours. Ticket prices range between $100.00 and $180.00 for a round-trip flight.

Though visitors can take the bus between Reno and Las Vegas, it is a laborious process as there is no direct route between the two cities. Greyhound runs the most consistent schedule with approximately two runs between the cities each day. However, this bus route takes between 18 and 20 hours and requires a transfer in Salt Lake City, Utah, along the way. Bus fare costs about $80.00 for a one-way ticket.

It takes seven to nine hours to drive between Reno and Las Vegas. The easiest route requires drivers to take I-80 to Fernley, US 50 to Fallon and US 95 into Las Vegas. It is a drive across the desert, so expect it to be hot and generally isolated, especially in the summer. It is important to be prepared with plenty of water when you make this drive. Many people prefer to drive this route at night when it is a lot cooler.