Getting from San Francisco to Las Vegas 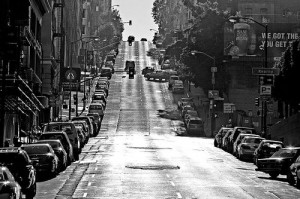 California and Nevada may be next to each other on the map, but the distance between San Francisco and Las Vegas can be deceivingly long. Because Las Vegas does not offer train service, visitors to the city need to arrive by air, bus or car.

Driving distance between the two cities is 570 miles / 917 kilometers.

United, US Airways, Virgin America and Southwest run nonstop routes between San Francisco and Las Vegas. Ticket prices are usually between $150.00 and $200.00, depending on the day of the week you’d like to fly. Check for cheap flights to Las Vegas before booking to ensure you get the best deal. Flight time is approximately an hour and a half. Total travel time is about three hours.

Due to the distance between San Francisco and Las Vegas, taking a public bus between the two can be boring and time consuming. Greyhound runs four buses between the two cities each day; Hostel Hopper has service once a week throughout the summer months. Your options for bus service increase if you’d prefer to travel to Los Angeles by bus or train first then take a bus from L.A. to Las Vegas, though this will take significantly longer.

The quickest way to get between San Francisco and Las Vegas by car takes approximately nine hours without stopping. This route consists of mainly highways (I-80 to I-580 to I-5 and eventually onto I-15) and is also quite boring. If your goal is simply to get from one city to the other, this is the route you’ll want to take.

However, if you have more time, consider taking a more scenic route. In the summer, consider crossing Yosemite National Park en route between the two cities. You’ll want to enter from the western side of the park and cross over Tioga Pass to Lee Vining, then drive on to Las Vegas from there. Tioga Pass is often closed in the winter and occasionally gets hit with a freak snowstorm during shoulder seasons, so check weather conditions before you leave for your road trip. This drive is about 610 miles / 981 kilometers and will take approximately 12 hours due to the speed limit and road conditions through Yosemite and the small towns you’ll pass through.

You might also consider rerouting your drive so that you pass through Death Valley National Park, which is particularly scenic in the spring when the flowers are in bloom.