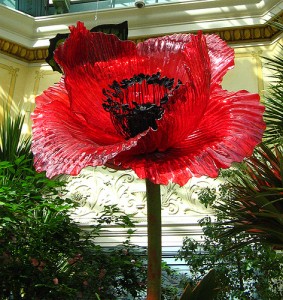 The sun is out, the pools are open and al fresco dining tempts visitors as they trip into Las Vegas during the month of April. Considered one of the most comfortable and appealing months to visitor Las Vegas, April invites visitors in with temperatures that range from 50F-80F, though you may also find the occasional 90F degree day.

Springtime in general is pleasant in Las Vegas. Get into the mood when you stop by the artfully decorated Bellagio Conservatory and Botanical Gardens and the waterfall atrium at the Palazzo. Skip the hot coffee and go with the iced. Enjoy a cool, fresh dessert, and peel off the sweatshirt in favor of a t-shirt or tank top.

Though most people have celebrated Spring Break by the time April rolls around, the feel-good party atmosphere lingers now that the pool clubs in Las Vegas are open for the summer. Celebrity sightings kick into high gear again as they make the rounds for springtime events at the night and day clubs.

In April, the city is pulling itself out of the slow season, so cheap airfare might be a bit more difficult to come by, but it never hurts to ask about deals that you might find at the hotels. After all, in order to stay profitable, Las Vegas resorts need to fill their rooms.

Easter falls during the month of April, and though Las Vegas is far from being a particularly religious place, there are lots of churches for countless denominations in town, and it’s easy to find Easter-related activities throughout the city. If, however, you don’t mind letting the holiday slip by without even noticing it’s taking place, Las Vegas makes it easy to do that too.

During the month of April, there are several activities and events going down in the city. The energy for the World Series of Poker heats up with a few circuit events, which lead up to the major competition during the summer. Those interested in the rodeo scene should check out the Clark Country Fair and Rodeo, which includes a wide variety of rides, live entertainment, fair exhibits, craft vendors and food carts. The fair is held in Logandale, which is located northeast of the city, so you’ll need to rent a car to reach it.

If music is your thing, carve time out of your schedule to check out the Las Vegas City of Lights Jazz, Rhythm and Blues Festival, which is typically held toward the end of the month. This annual festival features some of the biggest names in jazz via an intimate atmosphere … the way some would say the music is meant to be appreciated.

Finally, take the time to check out the city’s monthly activities, which provide a different perspective from the Las Vegas so many people are used to. On the first Friday of every month, locals head downtown for the First Friday Arts Festival. On the second Saturday of each month, you’ll find the food carts of Las Vegas congregated in an easily accessible parking lot for easy sampling.