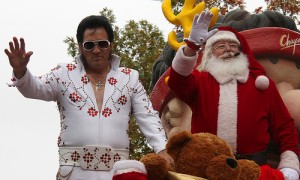 December is deep in the heart of winter in Las Vegas, just like it is everywhere else. However, because of its location in the southern United States, December in Las Vegas is actually quite mild. The daytime high average is around 60F, but at night the temperature hovers around freezing. Just because the city is located in the desert does not mean that it’s steaming hot year round, so prepare appropriately with a jacket as needed during the day and warmer clothes at night.

For the most part, the weeks between Thanksgiving and Christmas are a bit quieter than other parts of the year in Las Vegas, so it’s worth doing research to see if you can get cheap airfare or additional discounts when you book a trip. This also means that some of the popular Las Vegas shows might be black during this time, while performers take a break before the holiday season.

That said, the couple days leading up to Christmas through New Year’s Day are among the busiest in Las Vegas. It can be expensive to book a room during that time, and if you don’t make your plans far enough in advance, you may be left without anywhere to stay. If there are specific places that you’d like to dine on Christmas and New Year’s Eve, make reservations in advance. Make plans for VIP and table service at the nightclubs as early as possible or you could spend the last night of the year just standing in line. There are countless celebrity appearances, parties and celebrations on the Las Vegas Strip and in downtown Las Vegas for New Year’s Eve.

When it comes to special events and activities in Las Vegas during December, nearly everything has a festive flavor. The runaway shows at Fashion Show Mall feature Santa, the Fountains of Bellagio perform to holiday music and many Las Vegas resorts are decked out in lights, poinsettias and decorations. If you have a car, make a special trip to Henderson, where the Ethel M. Chocolate holiday light display is up, open and free to the visiting public. The chocolate factory is also open while the lit-up botanical garden is, so take a quick tour and enjoy a free sample.

If you’d like a dose of holiday tradition during your Las Vegas December vacation, check out the annual performance of the Nutcracker by the Nevada Ballet Theatre. The entire professional company as well as nearly 100 children from the Las Vegas community take part in the show. There are typically 5-10 performances (depending on the year) sometime in mid-December.

There are a couple other non-holiday events that are also part of the Las Vegas scene in December. The National Finals Rodeo is held over the course of a week in early December. Considered one of the most prestigious rodeos on the circuit, many of the events sell out, so if you’d like in on the action, act early.

The Las Vegas Rock ‘n’ Roll Marathon is also held in early December. The newly redesigned course is now much more user friendly for people participating in both the half and full distance foot race. A less intense race is the Las Vegas Great Santa Run, a 5k fun run that raises money for Opportunity Village, a local charity.