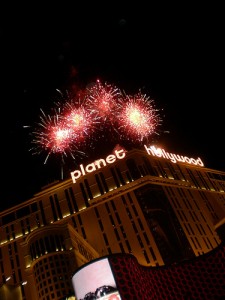 Las Vegas always starts the new year off with a memorable start. New Year’s Eve is one of the most popular holidays of the year in Sin City, and visitors and locals alike flock to the Las Vegas Strip and Fremont Street to ring in the new year with concerts, contests and fireworks from the roofs of the hotels. On New Year’s Day, the city is relatively quiet but crowded, as people pack up their bags, nurse their hangovers and head home for a fresh start.

Strangely enough, after the initial surge in visitation in Las Vegas the first few days in January, the city slows down a bit until mid-March, when the Spring Break crowd starts a new wave of tourism in Sin City. For this reason, if you’d like to visit Las Vegas when there aren’t as many people, then January is a good time to book a trip. As it’s still the middle of winter in Las Vegas, January is one of the coldest times of the year in the city. Daytime highs are in the high 50s, and, at night, the temperature can dip to freezing. Year-round pools are open, but it isn’t particularly warm (though it’s also not crowded). Some shows take a few weeks off during the month to give their performers a holiday break. If hotels or businesses are planning any reconstruction projects, they often begin in mid-January in order to complete construction by the time the heavier seasons pick up again.

In other words, January in Las Vegas is sort of the month of rebuilding and rejuvenation for those people and places that make the city what it is. If you don’t mind that the city undergoes a face lift of sorts during the first month of the year, then it’s the perfect time to find cheap airfare and book a room in Sin City because, even though it’s not the busiest time of the year, many of Las Vegas’ top attractions are still up and running.

There isn’t an overabundance of special events in Las Vegas during the month of January. However, there is an parade through downtown Las Vegas in honor of Dr. Martin Luther King, Jr., which people might want to consider attending. This is also the season for college basketball. If you’d like to watch the UNLV Rebels play, tickets for the general public are on sale for all games.

Some of the most popular conventions in Las Vegas also happen in January, including the International Consumer Electronics Show, the largest of its kind anywhere in the world. This show draws well over a 100,000 people and is the showcase for the most innovative and advanced technological inventions of the moment. The other popular convention in January is the Adult Entertainment Expo, which is a gathering of everyone involved in the adult entertainment industry. Though casual visitors are not able to get into the International Consumer Electronics Show, it is possible to purchase a fan ticket to the Adult Entertainment Expo.