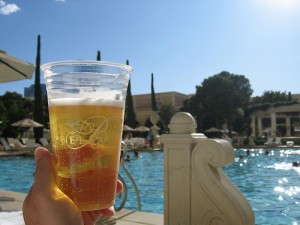 The days are long, hot and filled with sunshine. Though not much cooler than the daytime hours, Las Vegas summer nights drop in temperature while the nightclubs heat up. Frosty drinks and ice cold beers go down easily.

Despite the excessive desert heat that has the potential to blanket Sin City in July, it is a popular month for tourism. There is no truly defined low season in Sin City, so its hard to say when you’ll find the best Las Vegas deals. People who avoid hot summer months don’t put Las Vegas on their agenda for July, but sun worshipers are out in full force, and it’s a sure bet that the pools will be packed. With school out and weeks to go before summer comes to an end, visitors are happy, care-free and content to sweat, as long as they can do so with a cool beverage next to a pool with an air-conditioned building nearby. If you visit in July, expect to run into crowds, but most people are excited to be on vacation and the heat seems to slow everyone down a bit, so it doesn’t feel stressful.

If you’ve heard it once, you’ve probably heard it a million times: July heat in Las Vegas is dry, not humid, so it doesn’t feel as hot as it is. It’s true that the city experiences a dry climate, but it is still hot, and you should be prepared to sweat. High temperatures are almost consistently above 100F and frequently hit 115F. Add some wind into the equation and you might as well be walking in a blow dryer.

Mornings and evenings are cooler (with temperatures in the low 80s) and much more pleasant for a round of golf or a morning run. During the day, however, keep your sunblock nearby and either hunker down at the nearest pool or stay cool in an air-conditioned casino or hotel. Many visitors suffer from heat exhaustion or dehydration in the summer, especially if they’ve been drinking, so drink lots of water throughout the day as well.

People generally come to Las Vegas in July for the packed pool parties, which are frequently hosted by celebrities with renown DJs, but there are also several events throughout the city to keep you busy. The Fourth of July is arguably the most significant day of the month, with fireworks displays around town and the annual Boulder City Damboree Celebration, which takes place southeast of the city near Hoover Dam.

As surprising as it may seem, there are also farmers’ markets throughout the month of July in Las Vegas. These are normally held in the city’s parks on set days of the week. It’s always a good idea to check the Las Vegas Parks and Recreation guide as well, which provides information on movies in the parks and neighborhood events taking place around the city.