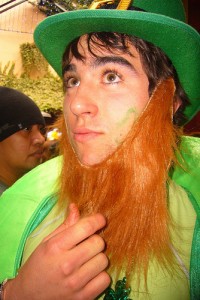 March in Las Vegas is the dawn of comfortable (but not too hot) weather and an uptick in visitors as colleges let out for Spring Break.

During the winter months, visitors often find their favorite shows black or things closed for cleaning and renovations when there aren’t as many people in town. The good news about March is that, by this time of the year, most shows have taken their long breaks off, and just about everything should be open and working at full capacity.

There is a slight lull in visitation in the weeks between Valentine’s Day and Spring Break season, and it shouldn’t be too hard to find a reasonably priced Las Vegas hotel room, though you’ll want to make reservations sooner than later, especially if you’ll be in town in mid to late March. Even if you won’t be in town for Spring Break, check for vacation packages, cheap airfare and discounts that may be bundled to draw Spring Breakers into town.

St. Patrick’s Day also falls in the month of March, and there are always parties and events held at the nightclubs in conjunction with the holiday. There are a handful of Irish pubs in the city, and this is the day to find live Irish music if you’re looking for it. If you are interested in more than just drinking green beer, consider starting your St. Patrick’s Day off by attending the annual Sons of Erin St. Patrick’s Day Parade and Festival, which takes place in nearby Henderson, Nevada.

Las Vegas’ weather in March is one of the biggest draws of the city during the month. Daytime highs reach about 70F and lows are about 45F. Later in the month, it is not uncommon to find a few days that sit comfortably in the mid 80s. This is a popular time of the year for people to pursue outdoor activities in and around the Las Vegas valley. If your idea of outdoor activities includes sitting by the pool with a frothy drink in your hand, you’re in luck because a number of pool clubs begin to open their doors in March as well.

March is also a popular month for events around the city as well as expos, though many of the expos aren’t of interest to those outside the industry. However, the Monster Jam World Finals takes place in Las Vegas every March; tickets are available for purchase in advance. If you’re into racing, check the racetrack schedule as it is common for NASCAR and other races to make their way into Sin City during this time of the year as well.