Las Vegas in the Fall 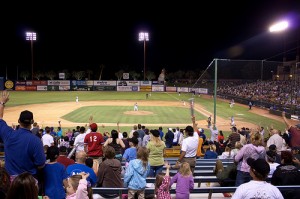 As the blistering days of summer begin to fade into a distant memory, the energy of Las Vegas takes on a different feel, and many people who live in Sin City would argue that September, October and November in Las Vegas are the very best months of the year in the city.

In all actuality, there is very little time between the scorching summer heat with the frigid air conditioning that accompanies it and the chilly winter temperatures that prompt families and businesses to turn on the heat. But those few short weeks between summer and winter really do offer a good opportunity to take advantage of some of the city’s offerings that are otherwise difficult to appreciate. This is the ideal time of year to indulge in some of the outdoor activities near Las Vegas or play a round or two of golf.

The weather throughout the fall months is fairly pleasant and comfortable in comparison to other times of the year. There may be some lingering days in September that are still warmer than 100F, but the average high is 95F, and that falls rapidly throughout October and into November, when the average high temperature is around 67F. Low temperatures in September average approximately 66F and in November that drops to the low 40s. If you plan on visiting in the fall, pack a sweater, sweatshirt or light jacket for the evening hours.

There is never really a slow season in Las Vegas, but if you visit during the autumn months, you won’t encounter as many families because school is back in session. Weekends, holidays and special events draw surges of visitors to the city. Labor Day, which occurs at the end of August or the beginning of September, is busy as people bid the summer farewell. Halloween is also particularly busy, especially if it falls on a weekend. Many people also travel to Las Vegas for Thanksgiving, though the week after the holiday is exceptionally slow.

If there is a home football game at UNLV, prices for hotel rooms in Las Vegas will probably be higher than normal as well. The Professional Bull Riders World Finals, which are held in October, also draw a large crowd of people to the city. As always, scope out Las Vegas deals before booking your flight or accommodations.

Throughout the fall there are more events going on in the community than normal, in part due to the more comfortable weather. If you have a rental car, you might consider hitting up Art in the Park (held in nearby Boulder City), which is usually held in early October or take advantage of the late summer and fall harvest at one of the area’s many farmers’ markets. Las Vegas’ minor league baseball team, the 51s, are also out in full force, and catching a home game at Cashman Field in downtown Las Vegas will only set you back between $10.00-$20.00.

If you decide to make Las Vegas your fall vacation destination, there are a few things to keep in mind:

For more information on planning your fall vacation in Las Vegas, check out: