Las Vegas in the Winter 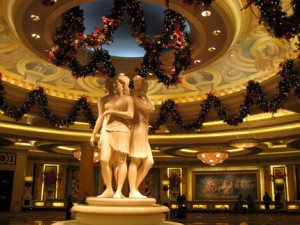 After the blistering hot months of summer in Las Vegas followed by the short but welcome autumn months, Las Vegas falls into a chilly but welcoming winter retreat for those hoping to escape the snow, ice and freezing temperatures of the northern states.

In the winter, days in Las Vegas are usually sunny and clear. The daily average high temperature in November is in the high 60s. Daytime highs in December and January are generally in the mid-50s, and the high in February starts to sneak back up over 60F again. It’s easy for people to forget that Las Vegas is in the desert, and that means that it can get downright chilly at night. In fact, it’s not unusual for nighttime temperatures to hover around freezing, though it is very rare for it to snow and stick. If you plan a romantic getaway in February, you have a great excuse to snuggle up!

Once Halloween is over, Las Vegas gets into the holiday spirit, and the festivities last until New Year’s Day. Though there aren’t a lot of actual events planned for Thanksgiving, many dining establishments in Las Vegas offer special menus for the holiday. This is also when many of the prolonged Christmas holiday events kick off. Until the last week in December, visitors to Las Vegas can visit the Opportunity Village Magical Forest, enjoy the lights at the Ethel B. Chocolate Factory in Henderson and catch Santa strutting his stuff on the runway at the Fashion Show Mall. Many of the hotels in Las Vegas also glam up for the holidays, with colorful strings of lights and decorations.

This is the place to come if you want to go shopping for the holiday season. Just like in any other city, you’ll be able to find seasonal specials and extended hours.

Winter is also a good time to get outside in Las Vegas. Though you might want to take along a sweatshirt and a hat or gloves, the cooler temperatures mean that this is the ideal time to hike at Red Rock Canyon or visit one of the nearby national parks (Death Valley National Park is particularly pleasant during this time of the year).

As the weather tends to be fairly favorable during the winter months, there are also a handful of festivals and events throughout the Las Vegas valley, if you have an interest in doing something with a bit of local flavor.

There’s never really a true low season in Las Vegas, but the weeks leading up to Christmas tend to be a bit quiet and the weeks between New Year’s Day and Spring Break are probably the slowest weeks of the year. Check for coupons or discounts for accommodations, shows and attractions.

However, if you plan to be in Las Vegas for Christmas, New Year’s Eve or the week between the two holidays, the sooner you book your room, the better. Hotels fill up extremely fast, and you will pay for the privilege to party in Sin City over the year’s most popular holidays.

If you’re ready to spend winter in Las Vegas, we welcome you to Sin City. Just keep the following tips in mind:

For more information on planning your winter vacation in Las Vegas, check out: