Virgin Airlines has been operating low cost flights in Europe and Australia for years. Recently, the airline finally operated their first American flights, after receiving permission to operate in this country as Virgin America, and while there aren’t many destinations so far – just five – one of them is Las Vegas. 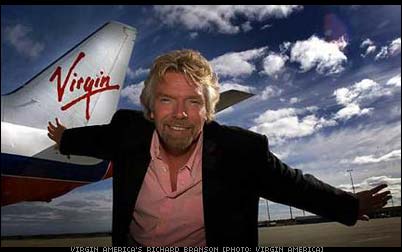 To usher in today’s inaugural Vegas flight, company founder Richard Branson will be holding a party onboard featuring showgirls from Le Reve, Carmen Electra, World Series of Poker champ Jamie Gold and Kyla Ebbert (the woman who was asked to leave a Southwest Airlines flight due to her outfit). Branson will reportedly also conduct a wedding during the flight.

Once in Vegas, Penn & Teller will host a dare-devil “Virgin America Takes Vegas” stunt that will find Branson repelling 40 stories off the Palms Casino’s Fantasy Tower (that’s 407 feet he’ll be dropping), to be followed by a celebrity poker match at The Wynn that will feature Gold, along with celebrities such as Conrad & Audrina Partridge (“The Hills”), SNL-vet Norm McDonald and the cast of Showtime’s “Dexter”.

So what sets Virgin America apart from other low-cost carriers flying into Vegas?

Each seat comes with a 9-inch touch screen offering satellite TV, 25 pay-per-view movie options (priced at about $8 each), 20 streaming radio channels, an option to create your own playlist from over 3000 mp3s, video games, and even an in-flight IM chat program to talk to other passengers (handy if your group is split up). The screen can also be used to order food, though the airline has not released their menu options. Each seat is also equipped for the tech crowd with individual power outlets for electrical and USB plugs. The airline says that soon they will also be equipped with ethernet for inflight broadband.

Main cabin seats are covered in black leather and come with adjustable padded headrests and 32 inches of legroom. Upgrade to first class, and you’ll be riding in style in – get this – oversized white leather seats featuring a built-in massage function and leg rests that raise up from the floor like a home recliner. Tell me which of you couldn’t handle riding cross-country with a mild back massage and your feet propped up, eh? To compensate for the leg rests, each seat comes with 55 inches of leg room. There will be no bumping of knees here. And each seat also comes with a flexible personal reading light attached to your seat back for easier reading.

For more information on the airline, or to book a flight, visit virginamerica.com.