Robert Goulet To Be Honored By Las Vegas Tomorrow 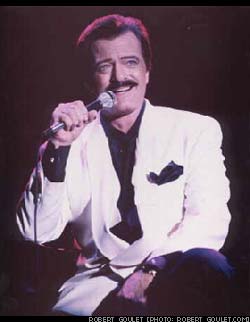 Singer Robert Goulet will be honored by the city he lived in tomorrow, Friday, November 9th, as casino and resort marquees around Las Vegas will flash his name in tribute.

He will also be remembered in a Vegas memorial service that will take place at the Roman Catholic Shrine of the Most Holy Redeemer tomorrow at 1pm.

Goulet, 73, fell ill when flying home to Las Vegas from a September 20th concert in Syracuse, N.Y. It was initially assumed to be a virus, but he got so weak, he was rushed to the hospital on Sept. 30th. The singer passed away from a form of pulmonary fibrosis on October 30th in Los Angeles, while awaiting a lung transplant.

If you’d like to attend Goulet’s memorial service tomorrow, it is open to the public. The church is located at 55 E. Reno Ave, just off the Strip on the south side of the Tropicana resort.