A few years back, in 2004, motorcross superstar Carey Hart and tattoo artist John Huntington paired together and opened a tattoo studio at the Palms called Hart & Huntington. They parlayed that into a reality show on the A&E Network called, “Inked,” but then things soured and the two eventually went their separate ways. 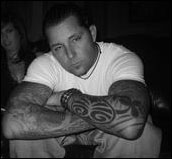 Hart retained the brand name and went on to expand to Hawaii and Orlando, FL. But then he decided to move his wares over to the Hard Rock Hotel, where he opened the rock club Wasted Space.

The Palms was left with an empty space from the absence of the Huntington & Hart tattoo studio. Not for long though, as it seems Hart’s former partner John Huntington is now returning to The Palms with his own shop, Huntington Ink.

Unlike the rock’n’roll vibe of the previous collaborative studio, this new incarnation is said to reflect Huntington’s love for Asian culture and martial arts in decor. The high-end tattoo “lounge”-like studio will feature a gold and orange color palette, water displays, a DJ station and even something they’re calling a “tattoo stage.”

Potential customers will also be able to check out the work done by the studio’s tattoo artists on an interactive wall of touch screen units.

“I am so excited to rejoin forces with George Maloof and the Palms team to take the casino tattoo experience to the next level. No other team could have brought me back to Vegas from Costa Rica. Expect to be blown away,” says Huntington.

No exact opening date was given beyond a vague “spring 2009,” but as soon as I hear an exact date, I will pass it on.

It also appears that Hart will open a new Vegas location for the Hart & Huntington tattoo studio, taking up residence over by Wasted Space sometime in 2009.