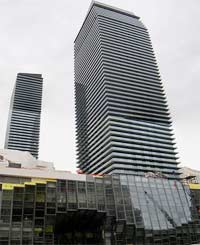 After many years of construction purgatory, John Unwin, the CEO of the Cosmopolitan, says the resort will finally be open in December of 2010.

It will be a soft opening, with about two-thirds of the rooms available to book. At this time, the casino, the resort’s 13 planned restaurants, the spa, nightclub and retail spaces should also be open. The remainder of the resort should be open by July 2011.

The real question is how will the Cosmopolitan stand out, especially situated next to the CityCenter mega-complex.

The project has been in a state of flux for so long, including various bankruptcies and owners, that it’s hard to believe it might actually open. But once it does, it faces the same issues as all of the other luxury resorts in drawing guests through its doors. Sitting in the shadow of CityCenter certainly doesn’t help.

As I get more news of an exact opening, I’ll post the information.

Mystere at Treasure Island will be hosting the 3rd Annual Nevada Ballet Theatre “A Choreographers’ Showcase” on April 18 & April 25 at 1pm.

The event features 11 original works by artists from the Las Vegas Cirque du Soleil shows and the Nevada Ballet Theatre.

Call 800-392-1999 for tickets, or visit the Nevada Ballet website for more information.

* * * * * * * * * *
A new CBS preview center is opening at Excalibur this month. Starting April 13th, guests will be able to preview shows for CBS and help influence the shows that make it onto the schedule next season. The preview center will be open from 9am-9pm.

There is also a preview center at the MGM Grand, down the Studio Walk shopping area. That one is open daily, 10am – 8:30pm.

IT’SUGAR opens this month at New York New York. The candy store already has a location open at the Town Square mall further south on Las Vegas Blvd, and offers an array of premium candies, chocolates and novelty gift items.

It is also home to the world-famous 5 pound gummy bear, which is also considered the Largest Gummy Bear in the World. It is the equivalent of 1,400 regular-sized gummy bears, comes in six flavors, and costs $40.00.

Hours of operation are 10 a.m. to midnight, Sunday through Thursday; and 10 a.m. to 1 a.m. Friday and Saturday.