Where to Watch the World Cup in Las Vegas 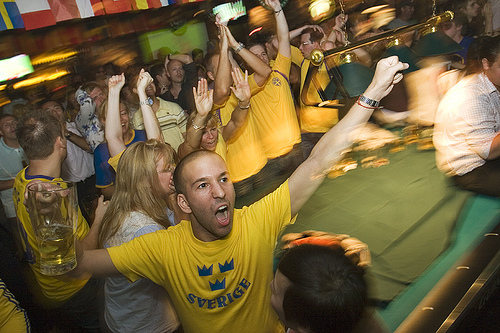 We may a little over a week into the World Cup, but there’s plenty of action to come. If you’re in Las Vegas for any of the games, there is no doubt that you’ll be able to find a big screen to catch even the smallest details on the field.Televisions are rampant across the city— in bars and clubs … even in the VIP cabanas at the city’s pool clubs!

If you think soccer fans are a bit fanatic anyway, wait until you catch a game in Las Vegas, where people have raised the stakes and bet on the games. Join the hype at any of these places to watch the 2010 World Cup.

Agave is open at the crack of dawn so you can be front and center when it comes to the World Cup. This colorful Mexican restaurant is opening at 7:00 a.m. every day and offering a breakfast menu to soccer fans. Located at 10820 Charleston Boulevard near Hard Rock Hotel.

The Crown & Anchor, an English-style pub, is where you want to be to cheer on England (though the TVs will likely be set to whatever game is currently on) . Open 24 hours a day, seven days a week, this pub also touts an extensive collection of beers and a high-energy vibe. Located at 1350 East Tropicana Avenue.

El Segundo Sol is a taqueria and margarita bar with happy hours that remain in effect throughout every World Cup game. Frozen margaritas are only $4.95 and bottomless chips with salsa costs $2.95. Located in the Fashion Show Mall on Las Vegas Boulevard.

The high-energy Irish pub Hennessey’s, located in downtown Las Vegas, is known for its food and atmosphere. Right now, the pub is pumping with World Cup excitement, where you can catch the action daily. Grab a bunch of friends, order a pint and let the afternoon slip away with the latest game. Located at 425 Fremont Street.

Enjoy Brazilian-Japanese infused cuisine at SushiSamba throughout the World Cup. Cocktails, contests and food specials are served alongside a play-by-play on the big screen. Located in the Palazzo on Las Vegas Boulevard.

Just about every casino has a sports book, and they’ll all be showing the World Cup, but here are a few that stand out from the crowd:

Hands down, one of the very best places to catch the World Cup in Las Vegas is Lagasse’s Stadium, a sports bar-meets-world-class dining facility with more than 100 televisions and food created by Chef Emeril Lagasse. Sure, you can order pub grub like burgers and chili cheese fries but with zest, all served in classic stadium-style seating. Located in the Palazzo on Las Vegas Boulevard.

The Las Vegas Hilton Race and Sports Superbook is one of the largest in the world with 30,000 feet of action. With more than 300 seats, 28 giant screens and even a 15-foot by 20-foot viewing screen, there is no shortage of up-close-and-personal action. Located at the Las Vegas Hilton.

Nothing is being held back at the M Resort’s Race & Sports Book, which seats 90 people comfortably. The M is offering in-running wagering with three ways to bet on every game. Catch the game on any one of the M’s 23 televisions. Located at the M Resort at 12300 South Las Vegas Boulevard.