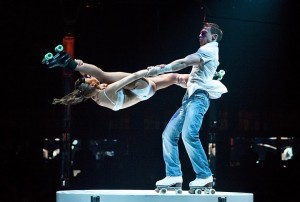 There are shows in Las Vegas, and then there are performances that leave you thinking, talking and really wondering if what you saw truly was as awesome as you remember. Don’t get me wrong … there are a lot of really fantastic shows in Las Vegas, but when people who have seen every one of them start making waves about something new in town, everyone takes notice. This is exactly what happened when Abinsthe moved in.

Tip back an imaginary shot of the potent absinthe and fall into a surreal traveling circus / variety show / comedy act that leaves audiences laughing, gasping and shrieking in delight from the first act to the final bow. The loose storyline of Absinthe follows a guy who is envisioning a series of funny, fascinating and downright crazy acts under the supervision of The Gazillionaire, all of which take place on a tiny stage in the middle of a small circus tent outside of Caesars Palace in Spiegelworld. The show starts with the guy himself, who balances several chairs on top of each other and then pops himself into a handstand at the very top, his toes just inches away from the lights and tent top.

There are countless shows in Las Vegas that feature acrobatic acts. The strong men always make an appearance, and there are usually trapeze artists or high-wire walkers of some sort. Yes, these acts also play a part in Absinthe, but as with everything else in this show, the acts are pushed just a bit further than anything else on the Strip. Highlights include the skating duo, who whip around at a frightening speed on the center stage just inches from those sitting in the front row, and the balloon performer, who fits herself inside a gigantic piece of latex for a bit of burlesque tap dancing. (This role, by the way, is filled by Angel Perrino.) The Gazillionaire and his assistant, Penny, make a couple of appearances onstage together, offering comedic relief throughout the show with a botched scarf act and a hilarious X-rated interlude involving sock puppets and unicorns with glitter. I’ve never been to another Las Vegas show where individual acts receive standing ovations throughout the show. That alone speaks to the quality of the performances.

The venue is very much a part of what makes Absinthe interesting. The beer garden and circus tent where Absinthe is staged make up the Spiegelworld carnival space. The beer garden is quirky and eclectic with pieces of unusual detritus. Inside the tent is a bar and seating that surrounds the center stage. It is a small, intimate performance space, and there’s no bad seat in the house, though I recommend you avoid the front row. Sitting there can be a bit harrowing as performers come within inches of your private bubble.

In my opinion, what makes Absinthe most enjoyable is the fact that every single one of the cast members truly, genuinely seemed to be having a good time. Many other Vegas shows separate the cast and the crowd. The cast has a job to entertain, and the crowd has a job to enjoy. With Absinthe, the performers encourage clapping and engagement with the crowd. They laugh, smile and roll with the vibe. It’s a fun, energetic and bizarre show, and it’s worth every penny and more. If you’re looking for a Las Vegas show that is raunchy, goofy and awe-inspiring all at the same time, this is it. I promise that you’ve never seen anything like it before.

Performance times are 7:30 p.m. Tuesday-Sunday with additional 9:30 p.m. performances on Tuesday, Thursday, Friday and Saturday. Guests must be 18 or older.