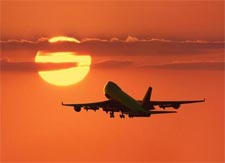 By now you’ve probably heard quite a bit about how hotels up and down the Strip are practically giving away their rooms. But maybe you don’t think you can afford the flight? Well, if you are even a bit flexible you’ll discover that cheap flights to Las Vegas are almost as easy to find as those hotel bargains.

These sales come and go pretty quickly, so you have to be paying attention, but if you are you might be rewarded with airline tickets to Las Vegas that are discounted to the point that it’ll practically cost you more to sit at home in your terrible and overcrowded apartment. And it doesn’t matter where you live, since everything seems to be on sale.

Flights from the Los Angeles area

JetBlue, which everyone seems to agree is probably the nicest domestic airline of all, has prices from Long Beach to Las Vegas for $49 each way. If you happen to live near Inglewood then this might not be great (and you can fly Southwest for about the same price out of LAX), but for most people the Long Beach experience is infinitely nicer than LAX or Burbank.

Again, JetBlue has deals starting at $124 each way from JFK to Las Vegas. A year ago you probably couldn’t fly to Boston or Philly for that price, and now you can get almost across the country! There are plenty of other similar specials if you look around and book when you find them.

Just today I read that several Vegas hotels are so desperate for visitors that they are giving crazy deals on food and drinks as well. For example, the Luxor is offering a special where for $35 you can get an all-day pass to their buffet, which may not sound that great until you hear that it includes unlimited beer, wine, and champagne. Are you kidding me? Other hotels have similar buffet deals too, so even though it may not be a great idea to eat buffet food all day, at least it’s damn cheap.

Shows and other attractions

Let’s face it, there are so many shows and other attractions in Las Vegas and not enough visitors that they have to wheel and deal like never before just to keep places half full so it doesn’t embarrass the performers. You can buy Las Vegas show tickets for maybe half the price they were before, so what are you waiting for?