Free Things to Do Off the Strip in Las Vegas

If you’ve been to Las Vegas before, you’ve probably seen the Fountains of Bellagio and the Sirens of TI. Perhaps you’ve chosen a rainbow of M&Ms to take home from M&M World and watched the gondoliers float by in The Venetian.

For veteran visitors and those who want to explore more of Sin City beyond the four and a half miles of Las Vegas Boulevard, there’s a whole valley to be explored. You’ll need to consider transportation: It’s possible to take a cab or bus to downtown Las Vegas; anywhere beyond that will probably require that you rent a car (unless you want to ring up one heck of a taxi tab). Beyond that initial expense, though, you don’t have to spend a fortune. Just as there are free things on the Las Vegas Strip, there are a number of things to see and do in other parts of the city that don’t have to cost a dime. 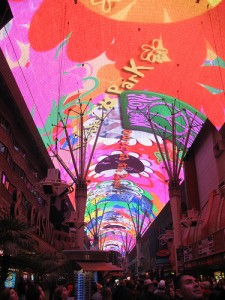 Fremont Street Experience
Fremont Street is, in many ways, the cornerstone of Las Vegas’ history. In 1905, the city was started near the corner of Fremont and Main Streets, and Fremont Street was the first paved road in the city. When you visit this area of town today, you are treated to what is now known as the Fremont Street Experience. It is home to Viva Vision, the biggest big screen in the world with 12 million lights and 550,000 watts of concert-quality sound. The screen is 90 feet above Fremont Street, now a pedestrian mall, and every night there are several musical shows as the lights bounce across the screen.

In addition to Viva Vision, there are also many things to see and do for free on Fremont Street. Expect to see street artists and impersonators and enjoy free concerts as you wander up and down this iconic street of old Las Vegas.

Rio’s Show in the Sky
If you make your way to Rio, the hotel located across the street from The Palms on Flamingo Road, you can check out the Show in the Sky. Held nightly above the casino floor in Rio’s Masquerade Village, the show is essentially a floating parade. There are three different shows, each featuring dancers in colorful costumes. The show is performed hourly Thursday through Sunday from 7:00 p.m.-midnight. If you’re in Masquerade Village on Monday, Tuesday or Wednesday nights, you’ll miss the Show in the Sky, but there is a live Latin band that performs. 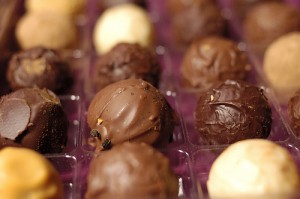 Ethel’s Chocolate Factory
Located in Henderson, Nevada, about 20 minutes southeast from the Las Vegas Strip, Ethel’s Chocolate Factory and its neighboring cactus garden are a great way to spend a of couple hours away from the hustle and bustle of the neon lights. The factory was opened in 1981 by Forrest Mars Sr. You can visit the factory and watch chocolate connoisseurs in action as they create the melt-in-your-mouth goodies that are sold in the gift shop and several other locations around the Las Vegas valley. Don’t forget to pick up a free sample!

Outside of Ethel’s Chocolate Factory is a cactus garden with a variety of desert vegetation. It is Nevada’s largest botanical cactus garden with more than 300 species of plants on the grounds. During the holiday season, the cactus garden is decorated with lights, and kids can visit with Santa Claus.

Hard Rock Hotel Rock Memorabilia
Just a touch off of Las Vegas Boulevard on Paradise Road, Hard Rock Hotel is worth visiting simply for the rock memorabilia scattered throughout the hotel. Guitars, clothing, letters, sheet music, records and shoes are in glass cases at every door, around the casino floor and down the hallways. Many of music’s greatest legends are represented, including Jimi Hendrix, Prince and Madonna. 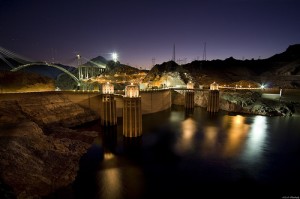 Hoover Dam
The Hoover Dam is located on the Nevada/Arizona border right outside of Boulder City, Nevada. Named one of the top 10 construction achievements of the 20th century, construction on the dam began in 1930 and was completed in less than five years. It is free to drive across the dam, though heightened security measures mean that some vehicles are subject to search and there is the potential to sit in heavy traffic while you wait to cross. If you prefer, you can also park and walk out across the dam. To learn more about the construction and history of the dam, you can pay to take a tour, which is well worth the time and money, but you can enjoy this attraction free of charge as well.

Mystic Falls Park and Sunset Stampede at Sam’s Town
Though not as splashy at the Fountains of Bellagio or as well-groomed as Bellagio’s Botanical Gardens, Mystic Falls Park at Sam’s Town is a nice reprieve from all the action on the Strip. Open 24 hours a day, Mystic Falls Park has rolling waterfalls and trees reaching up toward the ten-story ceiling. Several times a day, the park comes alive with music, lights and animation for the Sunset Stampede, which chronicles the pioneer experience. The water and light show can be viewed daily at 2:00 p.m. while the water and laser show combined with the patriotic show occurs daily at 6:00 p.m., 8:00 p.m. and 10:00 p.m.

You’ll need a car to reach Sam’s Town (it’s located at 5111 Boulder Highway), but if you do have wheels, it is only a short drive to reach this attraction.

Are you staying on the Strip? There are plenty of free things on Las Vegas Boulevard too!