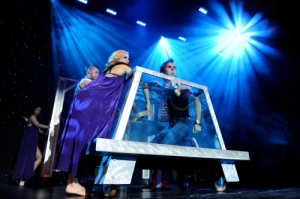 If there’s one thing Las Vegas has, it’s its fair share of shows. Whether it’s acrobatics, magic, comedy, illusions, dancing or any combination of those, there is something in Sin City that fits the genre. So when a new Las Vegas show enters the scene, my first question is always: Does this one have staying power?

It may be hard to believe, but located off-Strip is a show at Clarion Hotel & Casino that is definitely worth giving a second glance. You may never heard of the hotel, but the act inside—ILLUSIONS—is one that I really believe may stick around Las Vegas for a long time to come.

The star of ILLUSIONS is Jan Rouven, who has performed magic for several years in Europe. For 75 minutes, audience members are treated to a number of thrilling acts interspersed with dance numbers performed by five dancers who also serve as Rouven’s support staff during the tricks. From the beginning of the show to the end, Rouven keeps up a high energy level as he performs a number of nail-biting thrills including the famous Water Tank trick (cuffed and chained under water, will he get out?) and puzzling how’d-he-do-that illusions such as Eclipse, where one of his assistants seems to move through a solid wall while a spotlight shines on her. His last trick, Master Illusion, is almost a page out of The Prestige, but Rouven insists he doesn’t have a twin brother.

One of the best things about ILLUSIONS is the amount of interaction Rouven encourages from audience members. During several of the tricks, he asks for audience member assistance, which is a bit nerve-wracking to watch, especially during those tricks that could have disastrous results. In Bed of Death, an audience member is asked to make decisions regarding falling swords, and in Hand Stab, a different audience member has to play Russian roulette with a single knife.

Of course there are a few tricks that are just for fun, and during these moments audience members can breathe easy yet still puzzle over how he manages these seemingly impossible feats.

The highlight of ILLUSIONS is Rouven’s enthusiasm for his magic and the personality he brings to Las Vegas.  For all the promising aspects of the show, though, there are a few things holding it back: There is an overabundance of dancing to fill in the gaps between tricks, which, though it’s decent entertainment, is a bit awkward, out of place and goes on just a little too long. In addition, Rouven has a fairly thick German accent, and he had to verify with audience members if he was using the correct words at times. Finally, his show would have been well suited to end on a risky, exciting note, but after performing the Master Illusion, he dropped the energy significantly with a pseudo emotional moment, which left the final curtain on a weird note.

Rouven certainly has his work cut out for him in Las Vegas; after all, there’s a lot of competition for tourists’ show dollars. I really believe, though, that with some time to polish his routine, pare down the unnecessary dance routines and find the right vibe to keep the energy high from the beginning of his show to the end, Rouven can and will take ILLUSIONS from just another show located off the Las Vegas Strip to one that people are talking about and seeking out during their Las Vegas vacations.

ILLUSIONS shows Thursdays through Tuesdays at 7:00 p.m. Tickets begin at $49.00 for general admission; locals and active and retired military are eligible for discounted tickets. Suitable for audience members aged 10 and up.

My ticket to ILLUSIONS was comped, but all opinions in this piece are my own.