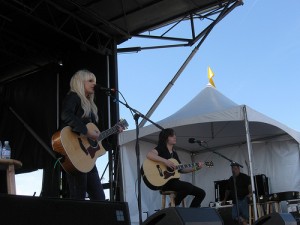 September is perhaps one of the most enjoyable months in Las Vegas. The summer rush is over; most kids have gone back to school, and, once Labor Day passes, many adults have written off their summer vacations as well. Though the pool clubs have calmed down a bit (and some may even cut back hours after Labor Day), and the nightclubs aren’t nearly as crowded, the weather in Las Vegas is still warm and inviting, making Sin City an ideal vacation destination.

Though September is not considered low season in Las Vegas, it isn’t nearly as crowded as the previous couple months, so it is definitely worth researching potential Las Vegas travel deals and checking on the promotions offered at the hotels before solidifying your travel plans.

The weather in Las Vegas in September is still warm; expect daytime highs to average around 95F and daytime lows to hover around 65F. You may be more comfortable playing a round of golf in the morning or the evening, but for the most part, the scorching heat of a Las Vegas summer has let up a bit.

Perhaps due to the drop in temperature, there are more annual festivals and events that occur in September than during June, July and August. One of the city’s most popular and genuine ethnic festivals is a Greek Food Festival that has been going on for nearly forty years. The multi-day festival is held on the grounds of St. John the Baptist Greek Orthodox Church in Las Vegas and features traditional foods and drinks, dancing, music and several areas to shop for jewelry, books, clothing and other authentic Greek items.

Super Run is a popular classic car show held in downtown Henderson (southeast of the Las Vegas Strip) in late September every year. Visitors to the event are welcome to check out the cars, which are judged in a number of categories. There is usually an assortment of entertainment that goes along with the event as well as food and product vendors.

The Las Vegas Bike Fest occurs annually at the end of September and into early October. For more than ten years, the Bike Fest has brought together thousands of motorcycle enthusiasts for competitions, shows and workshops as well as an extensive selection of vendors. Usually held at Las Vegas’ Cashman Center, the event also includes a concert series and other forms of entertainment.

On the other side of the state, visitors to Las Vegas can check out the Great Reno Balloon Race, a popular hot air balloon festival that also includes rides and games for children.