One of the biggest party nights of the year is New Year’s Eve, and of course, nobody throws a big party like Las Vegas. From resort events to all night club bashes to the biggest names in entertainment, no matter what your taste or budget, you’ll find the perfect way to ring in 2008 here in Sin City.

Since there’s so much happening on just that one night, here’s a quick rundown of some of the key nightclub events worth checking out on December 31, 2007:

The Bank (Bellagio)
Housed in the space where Light once stood at the Bellagio, this new club from the Light Group opens this weekend and will offer a multi-level extravaganza with a glass-encased dance floor. No celeb hosts have been named yet, but Dom Perignon and Belvedere vodka are co-sponsoring the night. Tickets will start at $250 per person, or you can nab a VIP table starting at $5,000, which includes four admissions and a bottle of that yummy Dom Perignon. There is also a resort-wide package that includes a special four-course dinner at Fix, plus admission to both The Bank and Caramel starting at $495 per person. Book online at lightgroup.com or by calling 702.693.8300.

Blush (Wynn Las Vegas)
This party includes an open bar from 9-11pm, a champagne toast at midnight and a special after-midnight performance by members of the Wynn production “Le Reve“. VIP passes start at $100 for women and $200 for men.

Body English (Hard Rock)
Grammy-nominated pop superstars Backstreet Boys host the New Year’s Eve countdown with open bar until midnight for those attending. They may even perform a track or two from their upcoming new CD. VIP passes start at $200 per person and are available via Ticketmaster or the Hard Rock box office.

Caramel (Bellagio)
Admission to Caramel’s NYE party starts at $40 per person for VIP entry, with music by their resident DJ. Add on dinner at Fix and VIP entry to The Bank, starting at $495 per person. Book online at lightgroup.com or by calling 702.693.8300.

Club Rio (Rio)
The first annual Emerald Dream Ball will pay tribute to twelve women who are survivors of breast cancer. Tickets are $750 for general admission and $1000 for VIP admission, which includes premium seating and gift bags. Both options include cocktails and hors d’oeuvres, silent auction, a Russian-style dinner, a spectacular Vegas theatrical production, champagne toast, live viewing of the fireworks over the Strip, a special appearance by Frank Marino, star of the Strip show “An Evening at La Cage”, a 5:00 am breakfast and many surprises throughout the night. Tickets can be purchased at the Rio box office or online at emeralddreamball.com.

Drai’s (Bill’s Gamblin’ Hall & Saloon)
This normally after-hours club will open at 10pm for this special event that will include tunes spun by DJ Chris Garcia. $100 gets you in and the party runs until 8am.

The 40/40 Club (Palazzo)
Music industry mogul Jay-Z unveils his newest club at the Palazzo at the Venetian a day earlier, but expect this party to top that, with not only Jay-Z and Beyonce in attendance, but a slew of their personal celeb friends from the worlds of sports and entertainment. Tickets start at $700 per person for this soiree, with VIP booths starting at $2,100.

Ghostbar (Palms)
DJs OB One and Stone Rokk will be spinning in 2008 at this party that includes an open bar with hor d’oeurvres from 8-10pm, a midnight champagne toast for $300 a person or go all out and get an All Access Palms Pass good for admission to Ghostbar, Moon, Playboy Club and Rain for $900 a person. 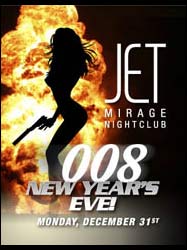 Jet (Mirage)
Pull out your 007 finest as Jet hosts an upscale James Bond-themed New Year’s Eve party. VJ Roonie G will perform a special live Bond countdown, with additional tunes provided by DJs Eddie McDonald and Neva. Staff will be dressed as Bond Girls and guests are encouraged to wear their Bond best. Tickets for this soiree start at $200, or add on a special four-course dinner at Mirage’s Stack starting at $295. Book online at lightgroup.com or by calling 702.693.8300.

LAX (Luxor)
Celeb siblings Paris and Nicky Hilton will be co-hosting this New Year’s Eve bash at Pure Management Group’s newest nightclub. This two-story venue at the Luxor will probably have all of the major tabloids waiting to report on what happens, so if this is your idea of a great party, $250 a person will get you in.

Mist (TI)
Admission to Mist’s NYE party starts at $30 per person for VIP entry, with music by their resident DJ. Book online at lightgroup.com or by calling 702.693.8300.

Moon (Palms)
Actress Jamie Pressley (“My Name Is Earl”) hosts the evening while her husband DJ Eric Cubeechee spins alongside DJ P. All this along with a midnight champagne toast and balloon drop can be yours for $200 a person, or go all out and get an All Access Palms Pass good for admission to Ghostbar, Moon, Playboy Club and Rain for $900 a person.

Playboy Club (Palms)
Has your wildest dream been to ring in the new year surrounded by a bevy of Playboy Playmates? If so, this bash at the Palm’s Playboy Club is for you. No less than ten Playmates will be hosting the night, which includes an open bar with hor d’oeurvres from 8-10pm, a midnight champagne toast and music from DJs Graham Funke and Mark Stylez, all for $300 a person, or go all out and get an All Access Palms Pass good for admission to Ghostbar, Moon, Playboy Club and Rain for $900 a person.

Prive (Planet Hollywood)
The Opium Group brings their Miami hotspot expertise to Planet Hollywood with this 12,000-square-foot Vegas outpost of their popular South Beach club of the same name. Canadian songstress Avril Lavigne will host the New Year’s Eve bash, with sounds by Lil’ Jon, and tickets will set you back $200 per person (includes midnight champagne toast), with tables and bottle service more. 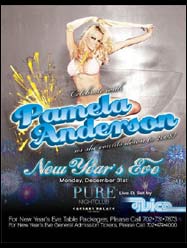 Pure (Caesars Palace)
The flagship of Pure Management Group’s Vegas clubs has roped in Pamela Anderson to do the NYE countdown. $250 gets you a ticket plus a midnight champagne toast. Not sure how many husbands and ex’s she’ll have in tow, but she’s always good for a tabloid-style party.

Rain (Palms)
A live performance by guitarist Dave Navarro with DJ Skribble leads up to the new year’s complimentary champagne toast. DJs Rob and Greg Lopez take over the tunes after. Tickets are $100 per person to attend, or go all out and get an All Access Palms Pass good for admission to Ghostbar, Moon, Playboy Club and Rain for $900 a person.

Revolution Lounge (Mirage)
Guests can enjoy an open bar from 9pm until midnight, and the club says they have a special guest performances scheduled but as of press time are not giving names. Passes start at $200 per person and $2050 for a table with bottle service.

Studio 54 (MGM Grand)
$200 gets you a VIP pass that includes open bar from 9-11pm, open champagne bar from 9pm-midnight and a champagne toast at midnight, plus music spun by the club’s resident DJs. Purchase in advance at the MGM Grand box office or Studio 54, because the price rises to $250 at the door.

Tangerine (TI)
The club was supposed to close in August, but PMG kept it open long enough to ring in 2008. Heading up the party is Kevin Federline (I know, I know) but hey, this one will only cost you $100 to get in and you still get free champagne at midnight. 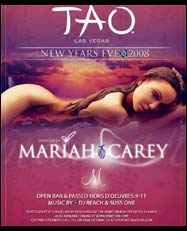 Tao (Venetian)
Chanteuse Mariah Carey hosts the crossover into 2008 at this party at The Venetian. Expect lots of her rapper friends to show as well. Tickets start at $250 per person and also include open bar with hors d’oeurves from 9-11pm and tunes spun by DJ Reach and Suss One. Buy your VIP pass in conjunction with any ticket for The Venetian’s bash with Earth, Wind & Fire, and your Tao pass will only be $75. Purchase at The Venetian box office online. For table inquiries, call 702.388.8588.

Tryst (Wynn Las Vegas)
Resident DJ Justin Huffman spins throughout the night and the club promises a celebrity host who will be named soon. Enjoy a premium open bar from 9-11pm for $150 (ladies) and $250 (gentlemen).

Voodoo Lounge (Rio)
DJs Joey Mazzola & Richie spin in the Groove Lounge with live music from LF8 while DJs Warren Peace, Mr. Bob and C-LA spin on the outer deck. All this plus view the city wide fireworks from their 51st floor outdoor terrace with a midnight champagne toast starts at $200 per person.

Wow…quite a list, eh? Well, we’re not even done with everything that’s happening. Tomorrow, I’ll cover the rest of the 2007 New Year’s Eve events in Vegas, from restaurants to city-wide parties. If you’ve got a club event not on this list, drop me a line.