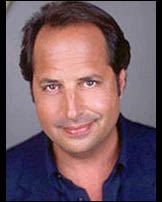 Comedian Jon Lovitz first rose to fame as a cast member on the long-running TV show “Saturday Night Live” from 1985 until 1992. His many memorable characters included Tommy Flanagan “The Pathological Liar” (known for the popular catch phrase “Yeah! That’s the Ticket”) and “Master Thespian”.

Not confined to the small screen, he has appeared in numerous films, including The Wedding Singer, The Stepford Wives (remake) and The Producers. He has also set foot on Broadway, appearing in the Neil Simon play The Dinner Party.

In May of this year, Lovitz signed with the Laugh Factory to do live stand-up every Wednesday at 8pm, in either Los Angeles or New York, depending on where he is.

But you don’t have to travel to those cities to see Lovitz, because he’s bringing his incredibly funny live routine to The Orleans Showroom this weekend, July 27th through 29th. The show will take place at 8pm nightly.

Tickets are normally, $44 – $66 each, but I happened to find a special code that will allow you to buy one ticket and get the second free. That makes each ticket only $22 – $33. A fine deal for such a funny guy.

To purchase, simply visit The Orleans online box office and enter the special code LOVITZ. It will then ask how many tickets you want and display the discounted price.