$26 a Night at the Excalibur in Vegas?

I recently got a mailing about a new room-only deal at the Excalibur and it is one of the best I’ve ever seen for this resort. Would you believe room rates as low as $26 a night? 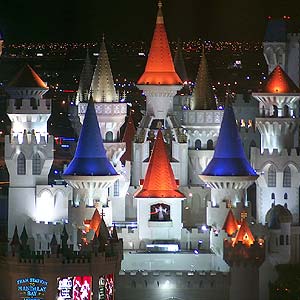 No, that’s not a misprint. I did a search of dates through fall and also spotted plenty of dates – Sunday through Thursday night stays – where rates were in the $29 to $40 range, too. Considering an average night ranges twice that at the Excalibur, this is a phenomenal deal.

But check this out… not only are there mid-week rates that low, but a quick look at weekend rates through the fall netted several Friday and Saturday night rates in the $60 to $80 range. Normally, it’s rare to find rates under $150 for weekends on The Strip.

This special includes stays through February 28, 2010, but all nights must be booked by May 13, 2009. Use code XGLT to book this room-only deal.

Now I know the Excalibur sometimes gets a bad rap for being a family-friendly hotel, because there are more kids here than say, the nearby MGM Grand or Mandalay Bay. But for these rates, who cares? Of course, these rates are probably also for older non-Strip-view rooms, but who really spends that much time in your room in Vegas anyways? To get rates this low, one usually has to stay off-Strip or Downtown.

While staying at Excalibur, you can also take advantage of several dining deals the resort is currently running, such as:

While at Excalibur, you can take in some of the resort’s great entertainment options, from Louie Anderson to Defending the Caveman to Thunder From Down Under (my pick for best male revue in Vegas). It’s also worth stopping by Dick’s Last Resort, Thursdays through Mondays late night, for great music by the band Panama and plenty of shenanigans from the staff – especially Taco.

It’s unlikely you’re going to find a better deal on the south end of The Strip, so I would definitely lock in these low rates asap. The resort enjoys a prime location at the corner of Las Vegas Blvd and Tropicana Blvd. It is connected by pedestrian walkways to the MGM Grand, New York-New York and Tropicana resorts. It is also connected by a free tram to the Luxor and Mandalay Bay.