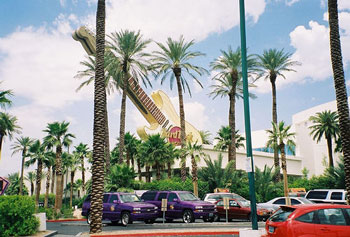 We are almost getting tired of writing about these amazing deals, even though they are fun and are great news for future visitors. It’s just weird to see how prices have fallen through the floor and you can practically just point at a hotel and give them a few bucks and they wave you on over.

Specifically, the Hard Rock Hotel, which is actually a really nice place that people were happily paying way over $100 per night even on weekdays, is now offering rates as low as $41 per night as long as you stay at least 3 nights. In case you haven’t been there, it’s the place where all the Hollywood stars used to stay before the Palms opened up, and many of them still stay at the Hard Rock. This is also where they hold awesome concerts in a small hall, so you can sometimes see big name bands in an intimate setting.

This rate is only for certain sets of dates, but I’m sure you can get a good deal almost no matter when you want to come, so give it a try.

Is $41 too much for you (cheapskate!)? You can stay right on the Strip at the Sahara for prices starting at $22 per night. You even get gaming credits thrown in, so as long as you are smart about how you use that, this room can be pretty much free.

It seems that there is no end to the deals lately. Cheap hotels in Las Vegas are as easy to find as sand on the beach, and cheap flights to Las Vegas are everywhere you look as well. I’m beginning to think they should round up all the homeless people in the country and put them into these rooms to just make things look busy. Some of them might win a bunch of money at the casinos and then lift themselves out of poverty. Dare to dream, homeless people!