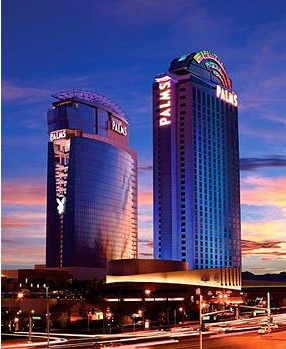 There’s no need to give the background information anymore. Las Vegas is getting crushed under its own weight this summer, and hotels and even airlines are scrambling in amazing ways to try to fill rooms and seats. Summer is usually kind of soft in Las Vegas, thanks partly to the insane heat and also due to the smaller number of large conventions scheduled, but this summer is far worse than normal.

By now you probably know that cheap Las Vegas hotels are easier to find than sand in the desert. And as long as you are interested in staying off the Las Vegas Strip, you can probably find rooms that are basically free, when you add things up.

The Orleans Hotel, which is a nice 3-diamond AAA property just one block off the best part of the Strip, has rooms starting at $18 per night, Sundays through Thursdays. You also get a $5 match play coupon and a few other goodies, so the final cost is next to nothing.

The Palms Hotel, which is where all the celebrities started to stay after they mostly abandoned the Hard Rock Hotel, is also off the Strip but still one of the hottest hotels in Vegas. They have a special going for $69 per night, including a VIP nightclub pass for their Playboy Club, for crying out loud!

The Imperial Palace Hotel, which is quite a nice place right on the Strip in a great location, has rooms starting just over $19 per night. This place probably was going for around $80 per night, and not a bad deal at that, last year.

Airfares are crazy cheap too

People might be tired of hearing about this part too, but it’s so shocking compared to normal that I have to mention it once again. Cheap flights to Las Vegas are everywhere you look. It’s really just a matter of using one of the meta-search sites, like Kayak.com, and seeing what comes up. But remember that some airlines like JetBlue, Southwest, and AirTran don’t appear on all sites, so it is a good idea to check around on more than one site. You can buy Las Vegas tickets directly from the airline sites, or sometimes you get an even better deal on a travel site that bundles an amazing hotel bargain into the package.